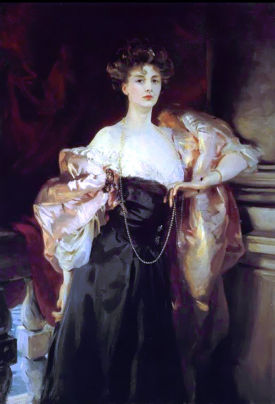 "Portrait of Lady Helen Vincent, Viscountess d'Abernon" is a 1904 oil painting by John Singer Sargent which is a highlight of the permanent collection of the Birmingham Museum of Art. The 64 1/2" x 42 1/2" three-quarter length standing portrait was purchased at auction in 1984 with funds provided by John Bohorfoush, the 1984 Museum Dinner and Ball, and the Museum Store.

Lady Helen Venetia Duncombe was born in 1866 at Duncombe Park, Yorkshire, the daughter of William Ernest Duncombe, the first Earl of Feversham, and Mabel Violet Graham (daughter of Sir James Robert George Graham, 2nd Baronet). She married Sir Edgar Vincent, a veteran of the Coldstream Guards nine years her senior, in 1890, shortly after he took over the governorship of the Imperial Ottoman Bank in Constantinople. He held that position until 1897 and in 1899 he was elected a Member of Parliament for Exeter. Lady Helen was, "the most celebrated hostess of her age and was 'by reason of her outstanding beauty, intelligence and charm, one of the most resplendent figures [in the later Victorian and Edwardian Social World]'" 1. She was associated with "the Souls", a salon of noted intellectuals of the day which included Arthur Balfour, George Curzon, Henry James and Edith Wharton. 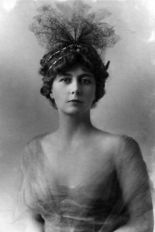 In 1914 Sir Edgar was granted the title of Baron D'Abernon. During World War I he chaired the Central Control Board, overseeing the traffic of liquor in the British Empire and later wrote a treatise on the effects of alcohol. Lady Helen trained as an anesthetist and treated over 10,000 patients during the war. Afterward, Sir Edgar served on the Inter-Allied Mission to Poland in 1920 and as the British ambassador in Berlin from 1923 to 1926, during which time Lady Helen kept a diary of her experiences, which was later published. When he retired from the foreign service Baron Edgar was elevated to Viscount D'Abernon. In 1936 he became Baronet of Stoke d'Abernon. The Vincents were childless and his titles expired with him in 1941. Lady Helen died in 1954.

John Singer Sargent was, by the time of this portrait, renowned as the premiere portraitist working. Born to American expatriates in Florence, Italy, Sargent grew up traveling throughout Europe and without formal schooling. He learned drawing from his parents who encouraged him to sketch during their travels. He began his serious study of painting in the atelier of Emile Carolus-Duran in Paris and was soon admitted to the École des Beaux-Arts. A star student, he idolized Diego Velázquez and Frans Hals as he mastered the alla prima method of using loaded brushes to build up tones without intricate delineation and underpainting. Although he preferred landscapes, Sargent adapted to the lucrative market for portraiture and embarked on a long and much-honored career.

This portrait of Helen was posed in a salon of the Palazzo Giustinian on the Grand Canal of Venice (glimpsed through the balustrade in the background). She is posed leaning against a large stone column wearing a fur-lined dress with a low bodice, wrapped in rich pink-colored stole and adorned with elegant jewelry. The black color of her dress was an abrupt reversal of an earlier depiction in white which the painter scraped off on the morning of the final sitting. 2. Lady Helen gazes straight out of the painting with a pensive look. A charcoal study of her face, possibly a study for the same portrait, is held by the York Art Gallery. The painting, which took three weeks to complete, was one of the few full portraits executed in oil that Sargent produced in Venice, though he visited the city almost every year. More often he spent his time painting outdoor scenes in watercolor. It is signed "John S. Sargent Venice 1904" on the lower right. Sargent retired from the portrait-painting business in 1907.

The painting hangs in a wood frame in the style of 17th century Spanish court that was built for Sargent by Charles Mitchell May.3. The painting remained with Lady Helen until her death, after which it was inherited by Lady Helen's nephew Sir Fergus Graham. It was bought by the museum from Graham's son, Charles at a June 1, 1984 auction at Christie's in New York City. It is currently displayed alongside Sargent's copy of Frans Hals' "Regentesses of the Old Men's Almshouse" in the museum's American Galleries.

A conservation effort commissioned by the museum was undertaken in 2004. The unlined canvas was removed from its stretchers and strip-lined with a polyester fabric to reinforce the tacking edges. The stretchers were reinforced and a breathable polyester loose-lining applied in tension to help support the canvas. The conservator removed some previous inpainting, especially in the area of Lady Helen's dress, which had been painted over so hurriedly by the artist. Careful new inpainting of damaged areas was then accomplished over a layer of synthetic varnish to make the new work reversible. A final top coat of varnish was then applied.