This article is about the 19th century hotel, for the private club, see Relay House club. 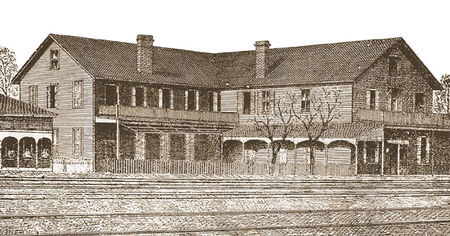 An engraving of the Relay House as seen from the southwest 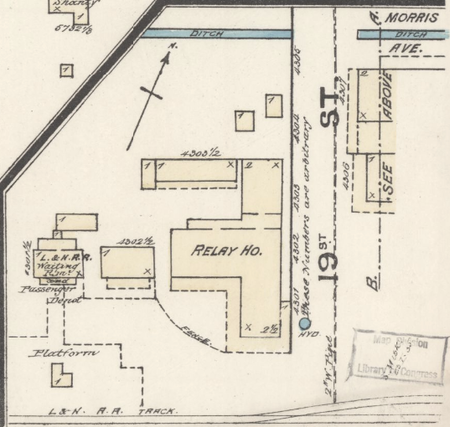 Detail from an 1885 Sanborn Map showing the Relay House

The Relay House was a 37-room, two-story, "L"-shaped wood frame hotel built by the Elyton Land Company in 1871 at the corner of Morris Avenue and 19th Street North adjacent to the Louisville & Nashville Railroad's first passenger depot at Birmingham's Railroad Reservation.

James Powell, president of the company, successfully lobbied the directors to levy a 5% assessment on its shares of stock to finance construction of the hotel, which had been foreseen in the company's articles of incorporation. Powell chose the name to reflect its use as station for the mail coach he operated.

A Mr Masterson was engaged to see to its construction. Although by charter, its construction was not to exceed $10,000, the final bill totaled $13,974.08. The building's exterior was wrapped with deep verandas which served as waiting and greeting areas for trains. Features of the hotel included gas fixtures, earth closets and a large cistern for water, equipped with pumps to pressurize a fire hose if necessary. Bells in each of the rooms sounded in the office. A garden on the property provided space for the raising of chickens and hogs for the kitchen, which was supplied with a spacious brick oven.

The Relay House was actually the new city's second hotel. It opened under the management of William Ketchum on December 15, 1871 and quickly became the social center of the young city. It served as a train station and gathering place for people doing business. Ketchum was assisted by his wife Jane and by his daughter Margaret and son-in-law, George R. Ward, the parents of future mayor George Ward. Mrs Ward hosted many of the city's early social events at the hotel.

On May 13, 1873 the Relay House became the first building served by the Birmingham Water Works Company's municipal water system. Ketchum planted a garden of eight parterres, each planted with a difference variety of grass. At the center of the garden was an, "ever-playing fountain, surrounded by a basin, and the basin by a circle of plants springing up between rocks."

In August of that year the Ketchums put the business, including its "lease, furniture, fixtures and good will," up for sale, but remained as resident landlords for the property.

A kerosene lantern hanging in the second floor hallway of the hotel exploded on the evening of August 19, 1877. The fire was discovered early by a watchman of the South and North Railroad and extinguished before irreparable damage was done.

On November 15, 1883 the hotel hosted hearings of the United States Senate Committee on Relations Between Labor and Capital, at which Mrs Ward was a star witness.

The Relay House was demolished in 1886 to make room for the new Union Passenger Station.