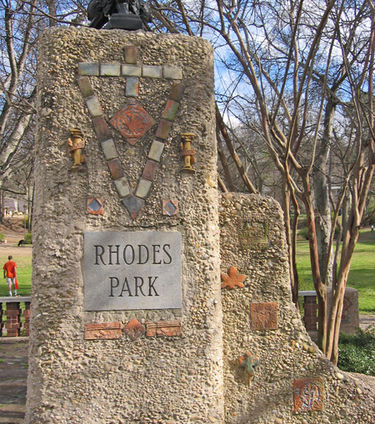 Rhodes Park is the central of the three public parks that was created in low-lying areas along Highland Avenue from its original design in 1884. Highland Avenue bows south to wrap around the park along a level route while Highland Court provides a straighter route with more changes in elevation along the north side.

The residential lots surrounding the 3 1/4-acre park were developed mainly between 1906 and 1911 and the park itself was improved according to a 1910 layout by Boston landscape architect George Miller. The retaining walls, benches and an outdoor stage were designed by William Leslie Welton in textured stucco with inset Moravian tiles

Around 1915 the park was named in honor of Birmingham News publisher Rufus Rhodes (1856-1910), who spent his last years in a home nearby at 2827 Fairview Circle. For many years, Rhodes Park was the setting of the Peter Rabbit Party, an Easter egg hunt organized by Rosalie Pettus Price for St Mary's-on-the-Highlands Episcopal Church.

In the 1960s and 1970s, residents in the Highland Avenue Historic District began to note the threat of historic homes being replaced by cheaply-built apartments. They made use of Rhodes Park as a central event space for fund-raisers and festivities which helped them gain public support for zoning protections and for restoration of the boulevard and its parks with improved lighting, planted median strips and sidewalks. The park has also served as a primary site for the annual Do Dah Day celebration and has gained an unofficial reputation as a neighborhood dog park.