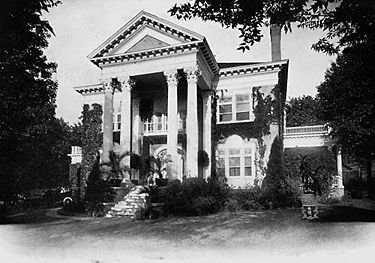 The Richard Massey residence was a Greek-revival style mansion located at 1401 Beech Street (21st Way South) on the southeast corner of Simmons Avenue (13th Avenue South). It was designed and constructed as a showpiece home by architect Joseph Clifford Turner in 1904, but never occupied by him.

The 20-room mansion featured a circular entrance hall with a marble fountain at the center. A circular stair gave access to the second-floor bedrooms while the top of the rotunda had a stained-glass dome which was illuminated at night. Each room, including the bedrooms, had a fireplace with a unique, hand-carved mantelpiece and a crystal chandelier.

On February 1, 1904, after the birth of their sixth child, Turner's wife died from pneumonia, having refused medical treatment due to her Christian Scientist faith. Turner sold the house to Richard Massey, founder of Massey Business College. He was able to negotiate a good price and bought it without consulting his wife, who had wanted to build a home on then-fashionable 5th Avenue North rather than "out in the country". She later came to appreciate her husband's foresight. The Masseys named the house Turner, and claimed that Flora's ghost haunted the upper gallery. 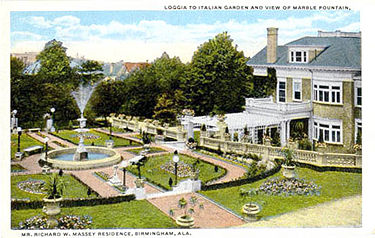 Massey brought an Italian gardener to design and oversee the maintenance of an elaborate terraced garden in the rear of the house. Through leaded-glass doors from the hall or music room, onto a wisteria-draped terrace, the garden was filled with aromatic plants and imported statuary. A broad terrace was surrounded by a seat-height wall and anchored by a large marble fountain. The manicured landscape served as setting for innumerable parties and dances, and was recognized as one of the city's loveliest spots, a favorite scene for postcard publishers.

As president of the Birmingham Chamber of Commerce, Massey hosted President William Howard Taft at the house during his 1909 tour. It was the home of Massey's five children, notably Elizabeth, a musician, and Eleanor, a painter, who were both married in the parlor. It was the birthplace of Richardine and Richard Massey, Jr.

It was sold after the Massey's children were grown and became the home of the Birmingham College of Music for a time. Later it served as the residence of Dr and Mrs James Crenshaw. The house was demolished in the 1960s for the construction of the Elton B. Stephens Expressway.