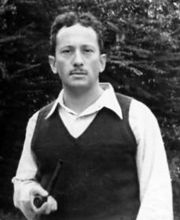 Richmond Croom Beatty (born January 6, 1905 in Shawnee, Oklahoma; died October 9, 1961) was a professor of English at Vanderbilt University, and a noted biographer, textbook author, and scholar of American literature.

Beatty, the son of William and Caroline Barbour Beatty, attended Barker Elementary School and Central High School in Birmingham. He graduated from Birmingham-Southern College in 1924 and completed his master's of arts at Vanderbilt in 1928. In college, Beatty starred in track and field, specializing in the hurdles and pole vault. He attended a summer program at the University of Chicago in 1928 and completed his Ph.D under John Donald Wade at Vanderbilt in 1930.

During and after college Beatty worked as a chemical analyst in the cast-iron pipe industry and as a cub for the Birmingham Age-Herald. He taught at West Tennessee State Teachers College and the University of Alabama before he joined the Vanderbilt faculty in 1937. While there, Beatty built on the legacy begun by his mentor, Wade, and helped establish Vanderbilt as a center for the study of American letters and solidified the reputation of the Vanderbilt University Press. He authored biographies of William Byrd, Bayard Taylor, Thomas Babington Macaulay and James Russell Lowell, and co-authored several standard texts used in the study of American literature. He also won a Guggenheim Fellowship in 1940 and served as literary editor for the Nashville Tennessean.

Beatty married the former Floy Ward on May 7, 1927. The couple had no children. He retired from teaching in 1956 due to illness, and died in October 1961.