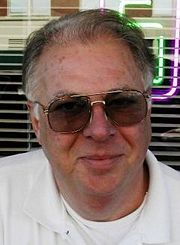 Ronald Wayne Blankenship (born December 1943) is a shoe repairman and was a candidate for the Democratic nomination for Jefferson County Sheriff in the 2006 and 2010 Democratic primaries.

Blankenship is a graduate of Jones Valley High School and North Alabama College, as well as a veteran of the U. S. Navy. He worked for Ford Motor Company for 20 years and was a police officer for various cities in Colbert County, running unsuccessfully for the Colbert County Sheriff's office in 2002.

According to Jefferson County jail records, Blankenship was arrested in June 2, 1987 for writing a bad check. On February 8, 1988 he was again booked for assault and posted bond. In May 1990 Vestavia Hills police, investigating Blankenship's possible involvement in a theft case and a camper fire at a State Park, discovered that he had faked his own death. The cremated remains of his uncle and copies of his death certificate were found in Blankenship's car when he was arrested. Police also found a cache of weapons and a trap door in his condominium. On May 3, 1990 Blankenship was re-arrested on the outstanding assault charge and for failure to appear. He was not charged for his part in the fraud because no claim had been paid. He was convicted of third-degree assault and served seven months of a one year sentence. He was released on December 18, 1990.

His wife, Judy Ruth Green Stonecipher Blankenship, was charged with forging the $340,000 insurance claim, but the 1991 trial was postponed when she suffered a brain aneurysm. A fugitive warrant was issued when she left the Florence hospital where she had been in a coma. The couple were arrested again in Killen (Lauderdale County) in April 1995. A judge later dismisseed the forgery charge, finding that Mrs Blankenship was mentally unfit to stand trial.

For his part, Blankenship denies any involvement in fraud. He claims that he was the victim of identity theft in 1990 and is eager to clear his record. He has not denied involvement in the assault case, but he denies ever having been convicted or serving time in jail. Vestavia Hills police lieutenant Rick Miller is certain that the candidate is the same man he arrested in 1990. The victim in the assault charge was involved with Blankenship's teenage stepdaughter, and jail records show that his occupation was "shoe repair".

Blankenship currently operates Grand Shoe Repair in Bessemer. He is now widowed and has five children.