Difference between revisions of "Seal of Birmingham" 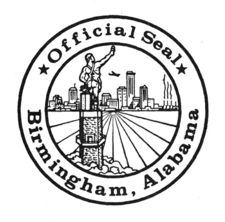 During the Birmingham Centennial in 1971 a special commemorative seal was used, featuring a frontal view of Vulcan holding his neon torch and an updated skyline featuring the Birmingham City Hall surrounded with the words "BIRMINGHAM CENTENNIAL" and the dates "1871" and "1971". A second motto "CENTURY OF MAGIC" curves below Vulcan between mine rails anchored with a mine car at either end. The seal was also featured on a commemorative coin, with the new Birmingham Jefferson Civic Center on the reverse. There is at least one example of the coin on the internet with a reverse showing Vulcan on his pedestal, with the words "Vulcan's Dedication" and the date "April 8, 1972" around the edge, separated by two small circles <ref>Template:Cite web</ref>>