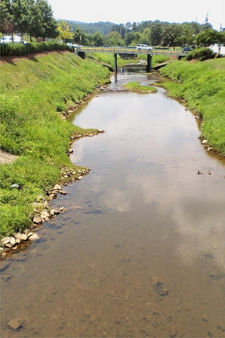 Some time in the 1940s or 50s a bridge-dam was created across the creek near the Bibb County / Shelby County line by sinking six railroad box cars into the bed. The railcars posed a hazard for recreational users and were removed in 2010 and 2011 with funding provided by the US Fish and Wildlife Service.