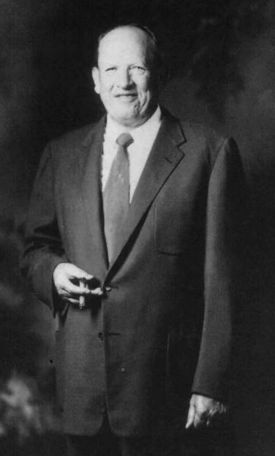 Sidney William Smyer (born May 30, 1897 in Cherokee County; died August 15, 1985) was an attorney, state legislator, president of the Birmingham Realty Company and chairman of the Birmingham Chamber of Commerce in 1963. That Spring he took responsibility for negotiating on behalf of the Senior Citizens Committee to forge the Birmingham Truce that culminated mass Civil Rights demonstrations of the Birmingham Campaign.

Smyer was the son of Walter Aurelius and Mary Mahala Puckett Smyer of Cherokee County. The family moved to Birmingham around 1900 and operated a dairy farm near the Alabama State Fairgrounds. Sidney attended West End Elementary School and Birmingham High School. He went on to earn a degree from the University of Alabama School of Law and served in the army during World War I.

On returning to Birmingham, Smyer and his brother, Shuford joined the law firm of his uncles Edgar and Rufus Smyer, who represented industrial interests. Smyer helped create the Alabama Economy League in 1932 and lobbied the Alabama State Legislature on behalf of the "Big Mules". In 1934 he was elected to the State House of Representatives, and re-elected in 1938, taking over Eugene "Bull" Connor's former seat. He and Connor were both active in the walkout from the 1948 Democratic National Convention over segregation issues and the formation of the States Rights Party (Dixiecrats), which held their convention that year in Birmingham's Municipal Auditorium, nominating Strom Thurmond for President.

In 1939 Smyer was appointed general counsel to the board of the Birmingham Realty Company. He was named vice-president of the firm in 1942 and president in 1953. In 1967 his son, Sidney Jr succeeded him as president and he became chairman of the board.

During Smyer's 14-year term as president of Birmingham Realty, he increased gross rental incomes from $343,000 to $1,243,000 and constructed 40 new commercial buildings, establishing himself as a prime force in the postwar development of Birmingham's downtown. He was a charter member of the Jefferson County Planning Commission when it was formed in 1947 and earned the nickname "Mr. Zoning" for his efforts. He was one of the sponsors of the Birmingham Metropolitan Audit which investigated the status of Birmingham's community interests and public institutions in 1959.

Smyer was also a co-founder of the American States' Rights Association, which sponsored Asa Carter's virulently white supremacist radio program, and was active in a laymen's association at Highlands Methodist Church which actively opposed integrationist voices in the national Methodist denomination. Though interested in preserving segregation, the virulent antics of Birmingham Commissioner of Public Safety Bull Connor forced Smyer to re-evaluate his allegiances. He was visiting Tokyo, Japan in May 1961 when Connor allowed a violent mob to attack the Freedom Riders at the Birmingham Trailways Station. Representing Birmingham in front of worldwide delegates to Rotary International, Smyer acknowledged that "These racial incidents have given us a black eye we'll be a long time trying to forget."1.

Through the Birmingham Chamber of Commerce, Smyer created a Senior Citizens Committee (or "Committee of 100") that cautiously discussed the issue of political change in Birmingham, including some concessions to the most glaring injustices of segregation. The group represented an unprecedented split among the "Big Mules" loyal to the Tennessee Coal and Iron Company and those preparing Birmingham for a more diversified economy. Smyer supported the Young Men's Business Club in its efforts to replace the Birmingham City Commission with a Mayor-Council form of government. The Commission's decision in late 1961 to close city parks rather than comply with Federal orders to integrate them galvanized moderates in favor of change. Smyer's committee met quietly with more moderate Black leaders such as A. G. Gaston, John Drew, Arthur Shores and Lucius Pitts.

As chair of the Senior Citizens Committee, Smyer negotiated the Birmingham Truce with leaders of the Alabama Christian Movement for Human Rights and the Southern Christian Leadership Conference, ending the organized campaign of mass demonstrations that became headline news around the world due to Connor's use of police dogs and firehoses to break up demonstrations by children at Kelly Ingram Park.

Smyer died in 1985 and is buried at Elmwood Cemetery. Smyer Road on Shades Mountain in Vestavia Hills is named for the Smyer family, which built several estate homes there.