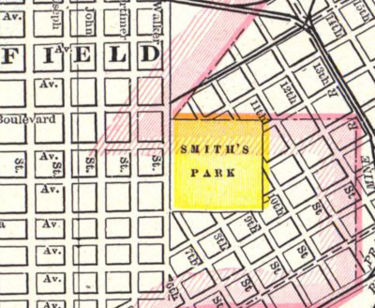 Smith's Park was a race track and park ground developed by Joseph Riley Smith in 1879 on the eastern edge of his Smithfield residential development. He purchased the property from James Ware and eventually deeded it to the City of Birmingham.

The park was the site of various large events of the 1880s and 1890s such as the Buffalo Bill Wild West Show, which encamped there on five occassions. It showed on maps through the mid 1920s and was indicated on the 1924 proposal by the Olmsted Brothers for "A Park System for Birmingham" as a "proposed park". It was later subdivided and developed for commercial use.

Smith Park was subdivided into business lots for sale by the Smith Estate in October 1925. A railway corridor connecting the Atlanta, Birmingham & Atlantic Railroad with other lines was constructed through the former park.