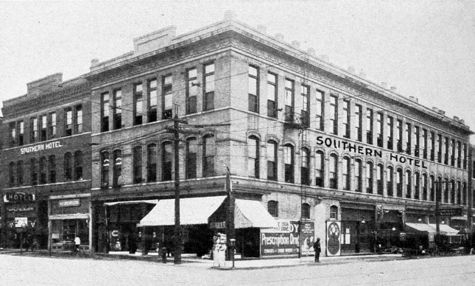 The Southern Hotel (originally The Linville House or the Linville Hotel) was a large hotel occupying two three-story commercial buildings on the southwest corner of 20th Street and 4th Avenue North in downtown Birmingham from 1899 to 1964.

In 1904 the hotel was advertised as newly "refurnished and redecorated" with single and double rooms available by the day, week, or month. W. A. Harris was the proprietor.

According to a 1909 advertisement, the "European plan" (no meals included) hotel was steam heated throughout and offered special attention of traveling men and families in the city for shopping. C. E. Burrell and D. R. Ridenhour were the proprietors, and rooms were rented for 50¢ and 75¢ per night. Those prices held at least through 1910.

In 1925 the Southern Hotel was billed as the "Headquarters for Union Men" in Birmingham.

The ground floor of the hotel supported numerous retail shops. The building was demolished in 1964 and the site was considered for the Birmingham Green Parking Deck which was eventually constructed on the opposite corner in 1976. The site remains an open parking lot.