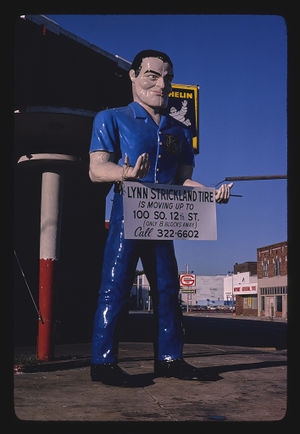 The "Stan, the Tire Man", also called the "Michelin Man" or just "The Big Man" is a 22-foot tall fiberglass statue that served as a landmark for the Lynn Strickland Tire Co. and now advertises its successor, GCR Tire.

Company founder Lynn Strickland was said to have acquired the statue from Las Vegas, Nevada in the early 1950s, though that account is inconsistent with the known years of production for such statues by International Fiberglass of Venice, California, from 1962 to 1974. The mould was first developed for a Paul Bunyan statue and the hands were positioned to hold a giant axe. Variants were sold to many businesses across the country, predominantly to auto parts suppliers. The figures came to be known, generically, as "Muffler Men".

Strickland Tire's giant figure, nicknamed "Stan", moved along with the business several times and was occasionally dressed up as Santa Claus at Christmas, and once as Elvis for a radio station promotion. At some time the statue's left hand was rotated so that he could hold two large tires. Until 1980 he stood outside the corner entrance of the one-story building at 200 21st Street South. That year he was moved to a more prominent spot on the roof of the company's new building at 1st Avenue South at 12th Street South, where he was visible from I-65. His freshly-painted costume included dark blue trousers and a blue shirt with the company's "LST" logo on the pocket.

The statue was broken in half by winds from a strong thunderstorm in February 1998. GCR hired Jerry Griffies to repair and repaint the statue. At this time his uniform was painted to resemble the standard attire of the company's technicians, with the letters "GCR" in red on his shirt.

The statue was moved again when GCR relocated to 3340 Vanderbilt Road near East Lake Boulevard in 2004. He now stands at ground level, behind a fence, at the north end of the plant.