Difference between revisions of "Steven Hoyt" 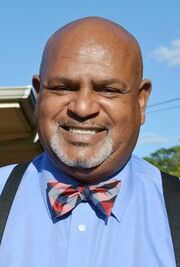 Hoyt was the eighth of nine children born to Lula Catherine Hoyt in Gadsden. He attended Gadsden public schools and went on to earn a bachelor's degree in social science with a sociology minor from Miles College in 1985. He also did some post-graduate work in urban and regional planning at Alabama A&M University. He was employed as a construction inspector for the Housing Authority of the Birmingham District, but resigned his seat on May 30, 2016.

Hoyt rose through the ranks of elected office in Birmingham, starting as vice president of the Five Points West community and president of the Belview Heights neighborhood. He has also served on the Birmingham Board of Education's policy and procedure committee and was vice-chair of the Commercial Development Authority. As a member of the Jefferson County Economic Development and Industrial Authority he helped draft a Minority Participation Policy governing contracts initiated by the authority. He has also served on the board of the Birmingham Airport Authority.

His campaign for the City Council included goals of demolishing the Camellia Terrace Apartments in Belview Heights and implementing a minority participation program for city contracts. A contract for demolition of Camellia Terrace was approved in November 2006. On the council he has chaired the Economic Development Committee and was a member of the Education committee and the Parks, Recreation and Cultural Arts committee. After the December 2015 committee realignment, he was appointed to chair the Public Safety & Transportation committee and to serve on the Planning & Zoning and Public Improvement committees.

Hoyt and his wife, Daphne have one daughter, Maya. Before he assumed the pulpit at West Princeton CME Church they were active members of Thirgood Memorial CME Church, where Hoyt served on the Steward Board and Board of Christian Education. He also sits on the Executive Board of the CME Church.

In March 2009 Mayor Langford's chief of staff, Deborah Vance-Bowie, claimed that Hoyt defamed her and threatened to file a lawsuit against him. As candidate for re-election in 2009, he pledged to provide commercial and recreational opportunities at Five Points West, to continue infrastructure improvements and work to eliminate blight.

Following his re-election, Hoyt was made president pro tem of the council and thereby succeeded Valerie Abbott as acting president while council president Roderick Royal succeeded Carole Smitherman as acting mayor. As a mayoral candidate, Hoyt campaigned on a platform of economic development and new housing. He pledged to recruit 10 new businesses to the city in his first year as mayor and to build or renovate 7,000 homes over 7 years. He also promised to promote transparency in city government, including detailed budgets available to all citizens online. Hoyt finished fifth out of 14 candidates, with 640 of the 34,931 votes cast.

Hoyt ran for a third term in the 2013 Birmingham municipal election. During the campaign, he called for a broader variety of youth programs and for creation of a 5th "Southwest Precinct" for the Birmingham Police Department.