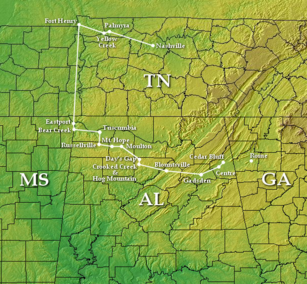 Streight's Raid took place from April 19 to May 3, 1863 in northern Alabama. It was led by Union Colonel Abel Streight, whose goal was to cut off the Western & Atlantic Railroad, which supplied General Braxton Bragg's Confederate army in Middle Tennessee. The raid was poorly supplied and planned, and ended with the defeat and capture of Streight and his men at Cedar Bluff, Alabama by Confederate General Nathan Bedford Forrest. Streight was additionally hindered by locals throughout his march, while pursued by Forrest, who had the advantage of home territory and the sympathy and aid of the local populace, most famously Emma Sansom. This unsuccessful raid was coordinated with the more famous Grierson's Raid down through the center of Mississippi, partially as a feint to confuse the Confederate forces.

On April 30 at Day's Gap on Sand Mountain, Forrest caught up with Streight's expedition and attacked his rear guard. Streight's men managed to repulse this attack and as a result they continued their march to avoid any further delays and envelopments caused by the Confederate troops.

The Battle of Day's Gap set off a chain of skirmishes and engagements moving eastward. Finally, on May 3, Forrest surrounded Streight's exhausted men three miles east of Cedar Bluff, Alabama. The actual capture of Streight's forces was achieved by a clever ruse, when Forrest paraded his much smaller force back and forth in front of Streight, convincing Streight that he was opposed by a superior force. After surrendering and being informed of the deception Streight reputedly demanded his arms back for a proper fight, a request cheerfully declined by Forrest.

The Union troops were sent to Libby Prison in Richmond, Virginia. Streight and some of his men escaped on February 9, 1864.