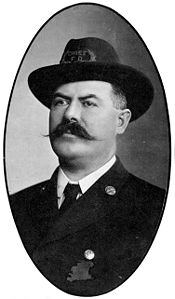 J. Thaddeus Mullin (born c. 1863; died 1942) was the first long-term Chief of the Birmingham Fire Department. Having served the department since 1887, he was appointed Chief in 1890 by the Birmingham Board of Aldermen and Mayor A. O. Lane.

Mullin came to Birmingham from South Carolina as an electrician and lineman for the city's first telephone exchange. His used his knowledge of telephony to implement the city's first electric fire alarm system.

During the 1893 financial panic, the city laid off 11 of its 33 firemen. The effectiveness of Mullin's shorthanded department was tested when a fire broke out at the Stowers Furniture Company on July 20, 1894, spreading to the nearby Caldwell Hotel. With help from other departments, the fire was kept from spreading across the city.

For the rest of the decade, Mullin petitioned the Board of Aldermen unsuccessfully for new firefighters and equipment, as well as upgrades to the water service supplying the hydrants. Another massive fire, started at the Birmingham Railway, Light & Power Company's Southside streetcar barn on April 17, 1901, destroyed the 3rd Presbyterian Church, and the adjacent home of Reverend James Bryan, who later served as chaplain for the department.

Under the threat of higher rates for fire insurance, the city finally agreed to fund improvements in the department and promote fire prevention city wide. On September 10, 1901 Birmingham became the first city in the South to earn a "Class 1" rating from the National Board of Fire Underwriters.

Mullin retired on August 1, 1905 and was succeeded by Birmingham Fire Station #1 captain Will Walton. He resided at 2208 5th Avenue North.

Mullin died in 1942 and is buried at Elmwood Cemetery.