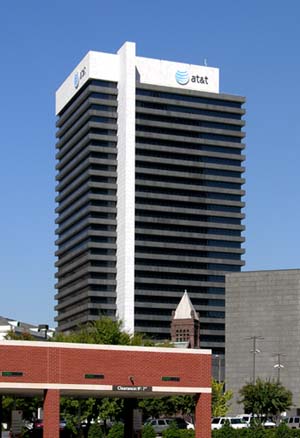 Construction of the tower commenced in 1968 and was complete by 1971. It was designed by Der Scutt of the New York architectural firm of Kahn & Jacobs, with Warren Knight & Davis serving as the local architect of record. The strikingly modern design of the tower features horizontal bands of dark pearl granite and glass contrasting with a pair of vertical white marble pylons and a two-story white marble top. The tower is rotated 45 degrees relative to the street grid in a departure from the typical building orientation in downtown Birmingham.

The interior lobby is noted for a large, metallic mobile designed by Lin Emery of New Orleans and a 70-foot mosaic wall along the corridor between the lobby and adjacent seven-story, 650-car parking deck. The skyscraper was constructed by the Henry C. Beck Company of Atlanta, Georgia. Its structural frame contains 8,350 tons of steel.

With 688,000 square feet of leasable space, it was Birmingham's largest office building, and is virtually tied with the Regions Center as the city's third-tallest skyscraper. Until 2018 it served primarily as corporate office space for South Central Bell and its successors.

Originally only the Bell System logo adorned the top band of the tower. In the 1990s the BellSouth logo was added. In June 2007, the BellSouth signage was replaced with the AT&T wordmark and four "globe" logos, each sixteen feet in diameter. 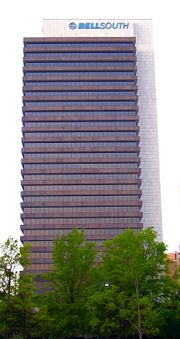 In 1994, an $80 million asbestos cleanup and renovation of the building commenced after BellSouth officials decided to consolidate local operations downtown instead of building new elsewhere. The project was designed by Giattina Fisher Aycock and completed, with Brasfield & Gorrie as general contractor, on April 1, 1998. The renovation was recognized by the EPA and U.S. Department of Energy as the first project in the state to earn an "Energy Star Label for Buildings".

In December 2013 AT&T put 252,000 square feet of office space on floors 16-27 up for lease. The tower was then owned and leased by J. P. Morgan Chase. By 2017 the building, which had once housed as many as 2,000 South Central Bell employees, was used by only about 300 workers. That April, AT&T announced that the remaining workers would be relocated either to the AT&T Data Center in Hoover or to other facilities before the company's lease ended in March 2018.

In March 2018 the building was purchased by "600 North 19th Street LLC" of Stamford, Connecticut for $29.25 million. In November of the same year, it was sold to "VCP City Center" a joint venture of Varden Capital Properties of Atlanta, Georgia and Tellus Partners of Norcross, Georgia, for $31 million.

The new owners anticipate redeveloping the building with 435 luxury apartment and condominium units. The project would include some ground-floor retail tenant space along with a fitness center, rooftop terrace and outdoor plaza for residents. As part of their efforts to secure Historic Preservation Tax Credits, the owners successfully submitted the building for inclusion on the National Register of Historic Places.