This article is about the 1903 Title Guarantee building, for the offices of the Land Title Mortgage Company, see Family Reserve Insurance building. 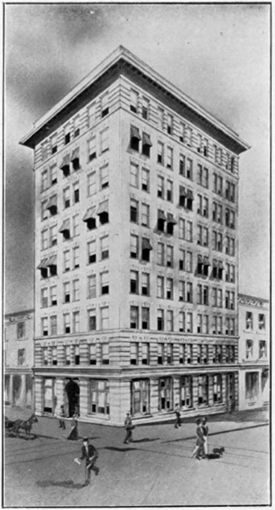 The Title Guarantee Building was, after the Woodward Building, only the city's second steel-framed "skyscraper". The owners boasted that the only wood used in the construction was for flooring. It was also the first building to provide tenants with electric power, from its own generators. Fresh water was pumped from a well drilled below the foundations.

The frame was clad in brown brick, laid with recessed courses on the second and upper floors to evoke rusticated stone. The paired double-hung windows are surmounted by brick jack-arches and the ground floor is embellished with brown terra-cotta in a subdued Renaissance revival motif with a round-arched entranceway at the center. 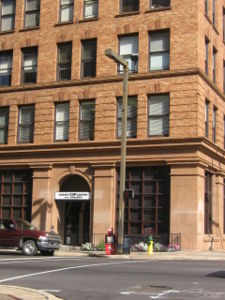 Ground floor of the Title Building in August 2009

The building was the home of the first "First Order" Weather Bureau station in Birmingham. It also housed the Birmingham Sunday School Association, the Peddinghaus Studio portrait photographers, and the Silver Pheasant Tea Room.

The deep cornice was removed in 1956.

In 1983 the building was purchased out of bankruptcy by John Lauriello, Neal Andrews Jr and David Johnson. Over the next two years, with assistance provided by the city and federal government coordinated through Operation New Birmingham, the exterior and interior were cleaned and restored as closely as possible to the original appearance. Moody & Associates provided design work for the renovations, carried out by Charles & Vinzant Construction Company.

Following the remodeling, the ground floor was occupied by First Commercial Bank. Later it housed Safari Cup coffee shop (2002-2009) and O'Carr's delicatessen (2010). The building is presently the home of Southpace Properties, which erected a neon sign on the corner in 2011.