Difference between revisions of "Tommy Langston" 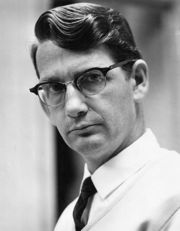 On Mother's Day, Sunday, May 14, 1961, a Trailways bus from Atlanta with Freedom Riders on board arrived at the Birmingham Trailways Station where the Riders were accosted by Ku Klux Klan members and National States Rights Party militants. Accounts vary of how Langston came to be at the scene. In one version he was at Acton's Camera Store near the station when he caught wind of the commotion. Fellow Post-Herald photographer Joseph Chapman recalls that Langston came in before his shift and cherrypicked the bus's arrival from the assignment board, which had been prepped by city editor Duard Le Grand. 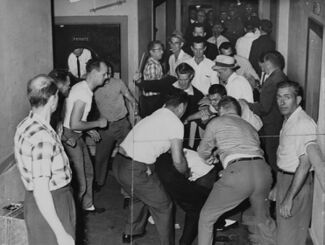 LeGrand had Chapman develop the film there, and the photo was published five-columns wide in the next morning's paper. It was one of the first times the Birmingham Civil Rights Movement got significant local coverage. The photo was then picked up by wire services and appeared around the world. It attracted national attention because it showed FBI informant Gary Thomas Rowe in the violent mob. In Japan, the image of uncontrolled racial violence embarrassed businessman and segregationist Sidney Smyer in front of the International Rotary Club. He returned to Birmingham and began working to remove Public Safety Commissioner Bull Connor, who had kept the Birmingham Police Department away during the attack, from office.