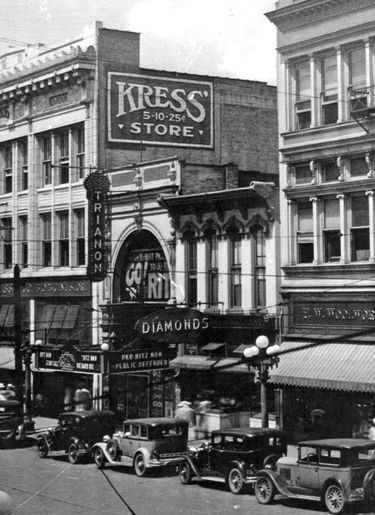 This article is about the cinema on 2nd Avenue North. For other theaters using that name, see Trianon Theatre (disambiguation).

The Trianon Theatre was a movie theater which opened in 1913 at 1916 2nd Avenue North. It was built for $10,000 by H. M. Newsome, who also operated the Amuse-U Theater, the Bonita Theatre, the Rialto Theatre, Strand Theatre and Newsome's Ice Cream Parlour.

The Trianon has been called the first "Ace" theater built in Birmingham specifically for motion pictures, as opposed to the familiar "Nickelodeons," later described as "any vacant building where seats could be screwed to the floor." A two-manual 10-rank organ (Henry Pilcher's Sons, Opus 778) was installed in the new theater, which also featured a balcony. Admission was 10-cents when it opened, although higher prices were charged for "event" screenings, such as the 50 cents for an unnamed Francis X. Bushman / Beverly Bayne "costume play".

Newsome sold the Trianon and the Strand to the Mudd & Colley Amusement Company in 1916. That year it was advertised as "The Favorite Theatre in Birmingham", screening first-run films distributed by the World Film Corporation, V.S.L.E., Fox and Metro.

In the 1920s the Trianon screened Fox newsreels and "Aesop's Fables" silent features. On June 14, 1921, when the Trianon was exhibiting William Fox's "The Face at Your Window", an anti-Bolshevik film with Klansmen as the heroes, the theater welcomed members of the Robert E. Lee Klan No. 1 who had been marching through downtown as a show of force immediately following the Tulsa race riots.

The Trianon Theatre closed in 1926 and was sold to Karl Hoblitzelle as part of his Interstate Circuit in January 1927. In 1930 the marquee of the Trianon was dedicated to advertising for the newer, larger Ritz Theatre, managed by Hoblitzelle, two blocks west. Later he apparently sub-leased the theater to another operator, possibly Richard Kennedy, who remodeled the interior. The theater closed again in 1932 and the building was renovated in 1934 for the Peggy Hale Dress Company.

The Trianon name was quickly picked up by the Wilby interests for their new theater at 3013 27th Street North in North Birmingham, which opened on June 23, 1934.