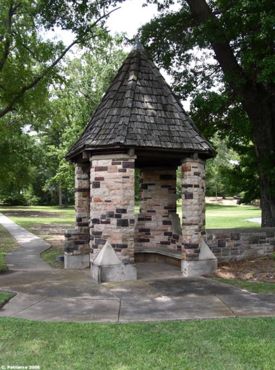 Civitan Park is a Trussville city park located along the Cahaba River in Trussville. The park is roughly bound by Gadsden Highway, Cherokee Drive, Chickasaw Lane, and Parkway Drive. The mall features playground equipment, picnic shelters, and the Trussville disc golf course completed in 2006. It is the site of many local functions and events and also features the pedestrian Happy Hollow District Bridge over the Cahaba.

On September 17, 2009 ground was broken for a 30-foot sandstone tower which serves as the centerpiece for Trussville Veterans Memorial, designed by Nimrod Long and Associates. A $1.7 million renovation to the park, including a greenway extension along the Cahaba, began in 2011. Work was delayed when the Alabama Department of Environmental Management determined that the contractor was allowing too much sediment to reach the stream. In June 2013 the city erected a fence around the park, closing it until work could be completed. The Cahaba River flooded during 2013, damaging the Civitan Bridge, which remained inside the fence until the greenway was completed and repairs to the bridge were completed.

The veterans memorial, along with a paved parking area for the memorial and the park situated on Parkway Drive, was dedicated on Memorial Day, May 25, 2015. The rest of the park remained fenced off until the greenway work was finally completed in July 2017.