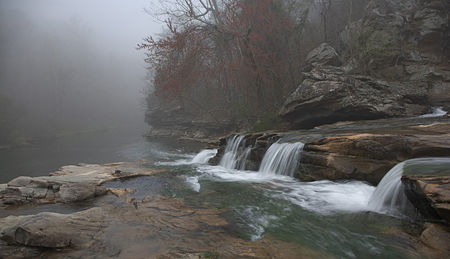 In 1998 Jefferson County proposed constructing a new correctional facility to house 900 prisoners close to the site of the falls. Opponents of the plan founded the Society To Advance the Resources at Turkey Creek (S.T.A.R.T.) which made a successful case to the Jefferson County Commission that the falls would serve the public better as a nature preserve than as a prison.

The fallout from the County's 1996 consent decree over sewer overflows into streams provided the mechanism by which the area was conserved. The county's fines were administered by the Freshwater Land Trust which purchased 466 acres around the falls and established the Turkey Creek Nature Preserve in 2003. The land trust continues to manage the preserve, with a resident land manager and ever-expanding public programs.