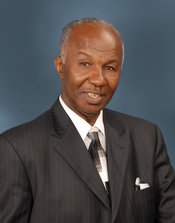 Tyrone H. Belcher, Sr (born c. 1942) is a retired postal supervisor and former Army sergeant. He was elected to the Birmingham Board of Education in 2009, representing the District 1 seat vacated by Martha Wixom.

Belcher has an associates degree in business from Lawson State Community College and has attended UAB and Daniel Payne College. He retired from the U. S. Army as a staff sergeant and from the U. S. Postal Service as a supervisor. He has volunteered as a tutor at Epic School and Wenonah Elementary School and is a member of the executive board of the Echo Highlands neighborhood association.

Running for the Board of Education seat vacated by Martha Wixon, Belcher defeated Keith Rice by a margin of 84 votes out of 3,130 cast. During his tenure, Belcher was involved in a physical confrontation with fellow Board members Willie Maye Jr and Brian Giattina at their January 25, 2011 meeting. Maye and Giattina filed police reports charging him with misdemeanor harassment, but no arrest warrants were issued.

In his campaign for re-election in the 2013 Birmingham municipal election, Belcher argued that board members need to put aside differences and petty loyalties to come together on the issues and support students, teachers and parents.