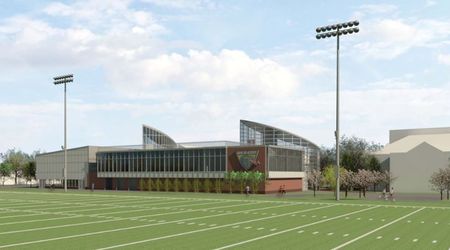 The UAB Football Operations Center and Legacy Pavilion is a training, office and operations facility built in 2017 to support the UAB Blazers football team as it returned to competition.

The 46,000 square-foot building includes administrative offices, meeting and film rooms, locker rooms, weightlifting areas and other training and support functions. The overall development also included upgrades to the adjacent outdoor turf practice field. The building was constructed on the south side of 6th Avenue South at 11th Street South, next to the Wallace Physical Education Building, and north of the Ullman Building. It is also just south of an area identified in the February 2011 long-range campus master plan as the future site of an on-campus football stadium, though those plans were set aside after the Protective Stadium project at the BJCC moved forward.

Funds to repay construction bonds for the Operations Building were raised through the UAB Athletic Foundation. Protective Life, headed by trustee Johnny Johns, committed a $500,000 gift toward the facility. The Board of Trustees voted in February 2016 to allow UAB to proceed with commissioning a design for the building from Goodwyn, Mills & Cawood.

Fund raising, including a $4.2 million sponsorship for a covered practice field from Legacy Community Federal Credit Union, exceeded expectations. UAB commissioned enhancements to the design and additions to the scope of work as "alternates". The UABOT approved the modifications, allowing the university to proceed with soliciting bids for construction.

Ground was broken for the building on August 29, 2016. The facility opened in August 2017. The 7-11 Building and Dowdy Building which had formerly housed football facilities were demolished in August 2019.