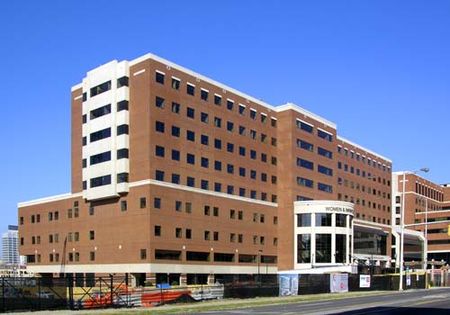 From across 6th Avenue South in December 2009.

The UAB Women & Infants Center is a $164 million hospital within the UAB Medical Center. The 430,000 square-foot facility includes an emergency delivery suite, the country's largest private-room neonatal nursery, wireless communication infrastructure, luxurious patient rooms with hidden medical equipment, and several amenities for long-term patients and visiting families. The building faces onto the Limbaugh Park of Hope and opened for business on February 21, 2010.

The hospital occupies Block 176 between 5th and 6th Avenue South and 17th and 18th Street South. It shares a nine-story building with the Hazelrig-Salter Radiation Oncology Center and other faculty and medical offices. It connects on two levels to the UAB North Pavilion and to the Benjamin Russell Hospital for Children.