This article is about the World War II light cruiser. For other ships with similar names, see USS Birmingham. 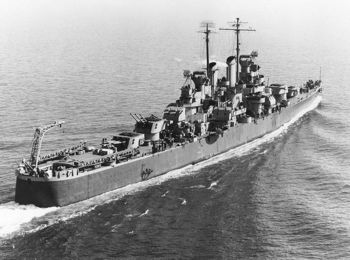 The USS Birmingham (CL-62), a light cruiser named for the city of Birmingham, was a Cleveland class light cruiser laid down at the Newport News Shipbuilding and Dry Dock Company on February 17, 1941 and launched on March 20, 1942 by Hattie Green, the wife of the Mayor Cooper Green. She was commissioned on January 29, 1943. The Birmingham, nicknamed Mighty B by her crew, was one of the "fightingest" ships of the Navy and suffered heavy damage on at least three occasions. Naval historians consider her to be one of the most "hard luck" ships in the US fleet, having endured two torpedo hits, a bomb, a huge explosion from a nearby ship, and a kamikaze attack within its two years of active service. The Birmingham News and Birmingham Age-Herald documented her dramatic trials and exploits for readers in her namesake city. After the war's end, the Birmingham was decommissioned, and ultimately scrapped at Long Beach, California in 1959. 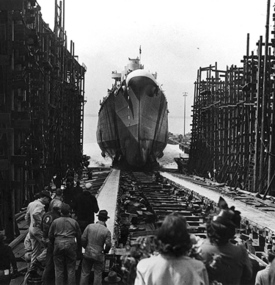 Following her shakedown cruise the Birmingham was assigned to the Atlantic Fleet. Patrick Luther accompanied Green to the launch as Birmingham's representatives. Departing Norfolk, Virginia on June 2, 1943, she steamed to the Mediterranean and provided long-range gunfire support during the U. S. Marines' invasion of Sicily (July 10-26, 1943).

During the invasion, the Birmingham answered a supply request from Patton's command, which had advanced beyond its own supply train. 2,000 Spam sandwiches were delivered from the ship by whaleboat to army quartermasters on shore.

Returning to the United States on August 8, the Birmingham was reassigned to the Pacific Fleet and arrived, via the Panama Canal, at Pearl Harbor on September 6, 1943.

Joining the fast carrier task force screen, she took part in the raids on Tarawa (September 18, 1943) and Wake Island (October 5-6, 1943). At the Solomons, she took part in the Battle of Empress Augusta Bay (November 8-9), along with her sister ships Cleveland, Columbia, Montpelier, and Denver. This was the first major action by the new Cleveland class light cruisers that were entering the fleet.

During the capture of Bougainville, while the Birmingham was providing covering fire for a Marine landing force, Japanese planes attacked the ship at nightfall. The nearest air base at Guadalcanal was unable to provide support due to storms. The Birmingham's guns shot down a handful of zeros, but the ship took hits from two torpedoes and a dropped bomb. The second torpedo caused an explosion, but only minimal casualties were reported. The next day, the Birmingham began a 5,000 mile trek to Mare Island Navy Yard in California for repairs which lasted until February 18, 1944, after which she rejoined the Pacific Fleet. 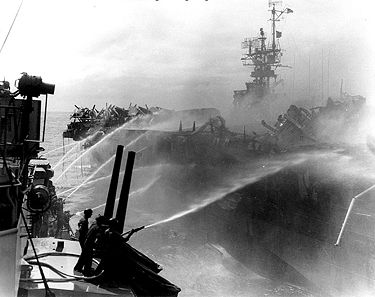 Assigned to Task Force 57, she took part in the Battle of Saipan (June 14- August 4, 1944); the Battle of the Philippine Sea (June 19-20); Battle of Tinian (July 20-August 1); Battle of Guam (July 21); and Philippine Islands raids (September 9-24). She then served with Task Force 38 during the Okinawa raid (October 10), northern Luzon and Formosa raids (October 15, 18-19), and the Battle of Leyte Gulf (October 24). During the latter she suffered great topside damage from explosions on board the aircraft carrier USS Princeton while attempting to aid the stricken vessel, victim of a 550 lb. bomb dropped from a Japanese Yokosuka D4Y bomber.

When the Princeton was crippled, the Birmingham and three destroyers left the Task Force fleet to attempt the rescue. While battling the last deck fires on the afternoon of October 24 a massive explosion sprayed the side of the Birmingham with shrapnel, killing 229 crew and injuring 420. The dead were buried at sea in a gruelingly long ceremony. Captain Thomas Browning Inglis praised his men's handling of the disaster: "The behavior of the crew was magnificent -- beyond my ability to describe...Where confusion or hysteria might have been excusable, there was nothing but order, coolness and selfless devotion to duty, ship and shipmates."

Afterwards, the Birmingham retired to Mare Island Navy Yard for repairs which lasted from November 1944 to January 1945. Rejoining the Pacific Fleet, the cruiser supported the Battle of Iwo Jima (March 4-5) and Battle of Okinawa (March 25-May 5). On May 4, after fighting off three attacks, she was damaged for a third time when a Japanese Kamikaze plane hit her starboard deck forward, carryng a 500 lb. bomb which penetrated to the sick bay three levels below deck before exploding. About 50 crew were killed in the attack. The plane's pilot was found dead in the water, having ejected. Returning to Pearl Harbor, she underwent repairs between May 28 and August 1, 1945. She had just returned to service with the 5th fleet when news of the Japanese surrender arrived. The fleet's last mission was to close down a series of wartime ports near Brisbane, Australia in November.

The Birmingham received a total of nine battle stars for her World War II service.

The USS Birmingham returned to San Francisco on March 22, 1946 and was taken out of commission and placed in reserve there on January 2, 1947. She was then stricken from the Naval Vessel Register on March 1, 1959 and then sold for scrap on November 12 of that year. She traveled to Long Beach, California in December and was subsequently dismantled.

An eight-foot long model of the Birmingham, owned by the United States Navy, was displayed for many years at Birmingham City Hall, but was later moved to a Naval training facility in Milwaukee, Wisconsin. The nascent Birmingham-Jefferson History Museum has secured the loan of the model from the Navy. It went on exhibit at the Southern Museum of Flight until the Birmingham History Center opened.

In September 2006, eighteen crewmen from the USS Birmingham and their families held their 32nd annual reunion at the Sheraton Birmingham, visiting Vulcan Park and the Alabama Veterans Memorial Park.