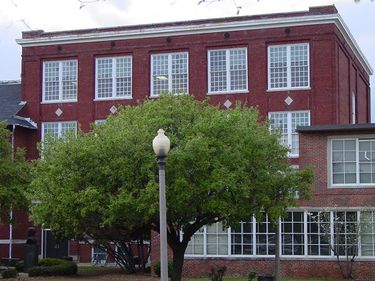 The Ullman building in 2002

The Ullman Building or Ullman-Bell Complex (formerly Ullman High School) is a historic building at 1205 6th Avenue South adjacent to the Legacy Pavilion football practice facility and UAB Parking Lot 15A. Originally part of Birmingham City Schools system, it was sold to UAB in 1970.

The Ullman School, a grammar school serving white students, opened in 1901 and was named for Samuel Ullman, a long-serving member of the Birmingham Board of Education. Eleven classrooms were added to the original 4-room unit in 1909. In 1937 the building became a high school for black students from Southside and Titusville. The high school was greatly enlarged with a new three-story classroom wing in 1957. The new wing obscured the original front facade of the school.

In 1970 UAB began using the former school for its classes. A year later the building was sold to the University, which used it to house its School of Social and Behavioral Sciences. In 1993 a statue of Samuel Ullman by sculptor Branko Medenica was dedicated at the building.

The Social and Behavioral Sciences program was relocated to the newly-constructed Heritage Hall in January 2008. That building's name was chosen to honor the heritage of Ullman High School, as well as of its namesake. The Ullman Building has since hosted UAB Blazers football team operations.

UAB has not finalized plans for the historic Ullman School. It has been suggested that the 1957 annex might be removed as part of a renovation of the older building. The Ullman High School Alumni Association received permission to install an exhibit of historical artifacts in the building in 2013.