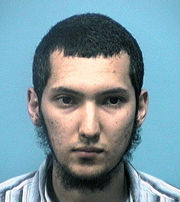 Ulugbek Kodirov (born c. 1990 in Uzbekistan) is a former Riverchase Galleria kiosk clerk who was convicted of threatening to kill President Barack Obama and of illegally possessing a firearm. He had been in contact with the Islamic Movement of Uzbekistan and purchased an M15 automatic rifle from undercover law enforcement agents.

Kodirov grew up in Uzbekistan and attended high school through the Uzbekistan National University's Lyceum and earned a nursing degree from the Tashkent Pediatric Medical Institute. He obtained a student visa and unsuccessfully applied for admission to Columbia University's medical school. He enrolled in English as a second language classes at ASA College in Brooklyn, New York. Meanwhile his student visa expired and he began working low-paying jobs to support himself. He eventually moved to the Oak Mountain Lodge in Shelby County where he was able to work operating a mall kiosk. He began visiting jihadist websites and came to believe that America was involved in a ruthless war against Islam.

In July 2011 Kodirov was arrested in Leeds shortly after purchasing a rifle from an agent of the Department of Homeland Security at the Hampton Inn. He was charged with making terrorist threats and with unlawful possession of an automatic weapon and an unregistered grenade. He was the first person charged in Alabama under 18 U.S.C. 2339A -- providing material support for terrorism. He was held at the Shelby County Jail before trial. His attorney, Lance Bell, argued that his naiveté made him susceptible to recruitment by jihadist groups on the internet and that after learning that their charges against America were untrue, he apologized and cooperated with prosecutors.

Kodirov pleaded guilty to two of five counts and was sentenced by Judge Abdul Kallon to 15 years, 8 months in prison.