Difference between revisions of "University of Alabama" 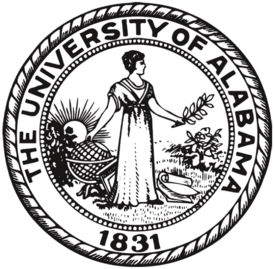 Alabama offers programs of study in 12 academic divisions leading to bachelor's, master's, Education Specialist, and doctoral degrees. The only publicly-supported law school in Alabama is at UA. (The state's other law schools at Samford University and Faulkner University are private.) Other academic programs unavailable elsewhere in Alabama include doctoral programs in anthropology, library and information studies, metallurgical and material engineering, music, Romance languages, and social work.

As of fall 2022, Alabama has an enrollment of 38,645 students, and its current president is Stuart R. Bell.

In 1818, Congress authorized the newly-created Alabama Territory to set aside a township for the establishment of a "seminary of learning." When Alabama was admitted to the Union on March 2, 1819, a second township was added to the land grant, bringing it to a total of 46,000 acres. The General Assembly of Alabama established the seminary on December 18, 1820, named it "The University of the State of Alabama," and created a Board of Trustees to manage the construction and operation of the university. The board chose Tuscaloosa, then-capital of Alabama, as the site of the campus in 1827 and opened its doors to students on April 18, 1831, with the Reverend Alva Woods as President.

An academy-style institution during the Antebellum period, the university emphasized the classics and the social and natural sciences. However, Alabama, a frontier state a sizeable amount of whose territory was still in the hand of various Native American tribes until the 1840s, scarcely had the infrastructure to adequately prepare students for the rigors of university education. Consequently, only a fraction of students who enrolled were adequately prepared for a university education. Like other universities of its time, many of the students were under age 18. There were around 100 students per year at the University in the 1830s. Few students graduated, especially in the early years. Those that did, however, often had distinguished careers in Alabama and national politics. Early graduates included Benjamin Porter and Alexander Meek.

Discipline and student behavior was a major issue at the university from almost the day it opened. Early presidents enforced strict rules regarding conduct. Students, for example, were prohibited from drinking, swearing, making unauthorized visits off-campus, or even playing musical instruments outside of a one-hour timeframe. Riots and gunfights were not an uncommon occurrence. At the same time, there was an active literary culture on campus and in Tuscaloosa. The University had one of the largest libraries in the country on the eve of the Civil War (more than 5000 volumes). It had several literary societies, including the Erosophic and the Phi Beta Kappa societies, which frequently had lectures by distinguished politicians and literary figures, including United States Supreme Court Justice John A. Campbell, novelist William Gilmore Simms, and Professor F. A. P. Barnard (later president of Columbia University).

To combat the severe discipline problem, president Landon Garland lobbied and received approval from the legislature in 1860 to transform the university into a military school. As such, many of the cadets who graduated from the school went on to serve as officers in the Confederate Army during the Civil War. As a consequence of that role, Union troops burned down the campus in April 1865 (though this was unrelated to Sherman's March to the Sea). Only four buildings survived the burning, including the President's Mansion built in 1841 and the Gorgas House built in 1829 (the oldest building on campus).

The university reopened in 1871, and in 1880, Congress granted the university 40,000 acres (162 km²) of coal land in partial compensation for $250,000 in war damages. The military structure was dropped approximately a decade after the school was officially opened to women in 1892 after much lobbying by Julia Tutwiler to the Board of Trustees.

On June 11, 1963, Governor George Wallace made his infamous "stand in the schoolhouse door" in defiance of court-ordered racial integration. He stood in the front entrance of Foster Auditorium in an attempt to stop the enrollment of two African Americans: Vivian Malone and James Hood. When confronted by U.S. Deputy Attorney General Nicholas Katzenbach and federal marshals sent in by U.S. Attorney General Robert F. Kennedy, Wallace stepped aside. Hood dropped out of school after two months, but subsequently returned and, in 1997, received his Ph.D. in philosophy. Malone persisted in her studies and became the first African American to graduate from the University. In 2000, the University rewarded her bravery with a doctorate of humane letters. Later in his life, Wallace apologized for his opposition at that time to racial integration.

In June 2003, the university marked the fortieth anniversary of the "schoolhouse door" incident by hosting "Opening Doors," a three-day event to salute the sacrifice and commitment of the courageous individuals who took a stand for racial change at a crucial time in its history.

The eight divisions of the University granting undergraduate degrees are:

Degrees in those eight divisions at the master's, specialist, and doctoral level are awarded through the Graduate School.

Founded in 1971 and merged into the College of Arts and Sciences in 1996, the New College program allows undergraduate students more flexibility in choosing their curriculum while completing a Bachelor of Arts or Bachelor of Sciences degree. The program allows students to create a "depth study" in a particular field chosen by the student. The student completes approved independent studies alongside their normal coursework. The objective of New College is to inspire interdisciplinary learning at the undergraduate level. 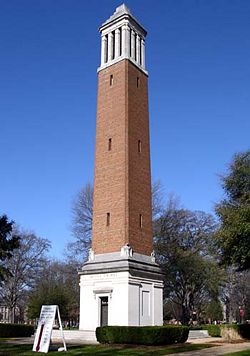 UA is composed of a singular campus of approximately 1,000 acres (4 km²). The campus is notable for its abundance of buildings built in the Greek Revival style. Four University of Alabama buildings survived the Civil War: Gorgas House, Maxwell Hall (the Old Observatory), the Little Round House (Civil War lookout post), and the President's Mansion. All are still used today.

Landmarks include the President's Mansion, the Amelia Gayle Gorgas Library, and Denny Chimes, a campanile equipped with a 25-bell carillon, all of which are located on or near the Quad, the central green on campus. The Quad lies roughly at the geographic center of the campus.

On-campus cultural facilities include the Paul Bryant Museum, the Alabama Museum of Natural History, the Sarah Moody Gallery of Art, and the Frank M. Moody Music Building, which houses the Tuscaloosa Symphony Orchestra. The university also maintains the University of Alabama Arboretum in eastern Tuscaloosa and the Dauphin Island Sea Lab at Dauphin Island.

As of the fall semester of 2006, the university has a total enrollment of 23,878 undergraduate, professional, and graduate students. Of which, 76% are residents of Alabama and 24% are out-of-state students. 81% of students are white, 11% are African-American and 2% are Hispanic.[1]

The University of Alabama was named a top 50 public university in the nation by U.S. News & World Report for 2006.

UA's School of Law ranks as one of the top law schools in the southeast, as it has been named one of the top 50 law schools in the United States several years in a row by U.S. News and World Report. UA Law scored in as the 43rd ranked law school in the country in the latest report. The law school boasts prestigious alumni such as United States Supreme Court Justice Hugo Black, long time Alabama senator Howell Heflin, and both current U.S. Senators from Alabama (Richard Shelby and Jeff Sessions).

UA is one of the 113 members of the Association of Research Libraries, which yearly compiles internal rankings. In 2004-2005, the last year for which statistics are available, the University of Alabama ranked 94th (out of 113) in support staff; 98th in total expenditures; 83rd in total volumes; 73rd in current serials; and 103rd in total items loaned, a measurement of the library’s use.

With more than 23,000 students enrolled, the university has a healthy student life component, although many students complain that increasing enrollment without a commensurate increase in the size of the faculty has led to excessively large class sizes in some areas.

Greek letter organizations first appeared at the University in 1847 when two men visiting from Yale University installed a chapter of Delta Kappa Epsilon. When DKE members began holding secret meetings in the old state capitol building that year, the administration strongly voiced its disapproval. Over the two decades, four other fraternies appeared at Alabama: Alpha Delta Phi in 1850, Phi Gamma Delta in 1855, and Sigma Alpha Epsilon in 1856 (this was the founding chapter). Anti-fraternity laws were imposed in that year, but were lifted in 1890s. Women at the University founded the Zeta Chapter of Kappa Delta sorority in 1903. Alpha Delta Pi soon followed.

The University today recognizes 48 social Greek letter organizations. Any number of unofficial "off-campus" fraternities and sororities also exist. Approximately 20% of the UA undergraduate student population is a member of a social Greek organization. Three governing boards oversee the operations of the Greek organizations: the Interfraternity Council (IFC), the Panhellenic Association, and the National Pan-Hellenic Council (NPHC).

For the most part, however, Alabama's fraternities and sororities are segregated, with the IFC and Panhellenic Association comprising a so-called "white Greek system" with the NPHC forming the countering "minority Greek system." The cause of this self-segregation, voluntary or otherwise, is a source of constant debate at the University. However, integration of the Greek system has recently been slowly occurring. In the fall of 2000, Gamma Phi Beta was the first Panhellenic sorority to accept an African-American member at the University.[2] In the spring of 2003, one of the largest and fastest growing multicultural sororities in the nation, Delta Xi Phi Multicultural Sorority, Inc., founded a chapter at the University. It is now the first and only national multicultural sorority on campus, and has been steadily growing in size. Also in 2003, Alpha Delta Sigma was founded at the University of Alabama. This was the first social sorority ever to be founded at the University, as well as the first sorority to emphasize diversity. In 2005 Phi Iota Alpha Fraternity initiated two brothers who are still active on campus. In April 9th, 2006 the University of Alabama Colony of Sigma Lambda Beta was established, making it the first fraternity of its kind in the State of Alabama. The Colony become historic for its diverse brotherhood and ideals, and their apperance was published in numerous newspaper articles. As of December 14th 2006, the Colony chartered as the Theta Gamma Chapter of Sigma Lambda Beta.

Since its founding in 1914, a secretive coalition of fraternities and sororities, commonly known as "The Machine", has wielded enormous influence over the Student Government Association. Occurrences of harassment, intimidation, and even criminal activities aimed at opposition candidates have been reported. (Esquire magazine devoted its April 1992 cover story to an expose of the Machine.)

For many, the University of Alabama is best known for its athletic programs, known as the Alabama Crimson Tide, and their storied traditions. Alabama first fielded a college football team in 1892, and that sport, more than any other, is the hallmark of Alabama athletics. The school is a charter member of the powerful Southeastern Conference, which was organized in 1932.