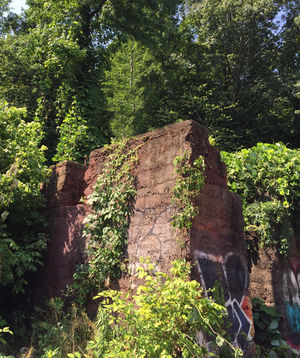 Valley View Red Ore Mine operated on the northern slope of Red Mountain from 1904 to 1924.

Under contract to the Central Iron and Coke Company of Holt, owners of the mine, Birmingham Ore and Mining Company began surface work on outcroppings of the famed Red Mountain iron ore "Big Seam" around 1904 at the Valley View mine site. Shortly miners opened several drifts, and in 1906 they began an underground slope mine following the dip of the ore seam. Ore cars drawn up the slope by hoist cable delivered the ore to a crusher at a siding of the Birmingham Mineral Railroad. Crushed ore was loaded directly into railroad cars for delivery to Central Iron's blast furnaces at Holt. The mine finally closed in 1924 after suspending operations from 1916 to 1921. In 1923 additional structures at the mine included 23 houses, a store, 2 barns, a tipple, shop, supply hoist, oil house, powder magazine, dam, and water tower -- none extant by 1993.

The crusher foundation is still visible (as of 2016) alongside the Vulcan Trail beneath The Club restaurant.