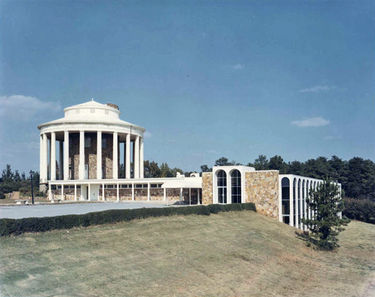 View of the church and education building in the 1960s

Vestavia Hills Baptist Church is a congregation organized on May 6, 1957 in Vestavia Hills. It first met at the Vestavia Hills City Hall before purchasing the former Vestavia estate on the crest of Shades Mountain on March 4, 1958.

For more than a decade the church met in the banqueting room of Ward's former home, a landmark patterned after the circular "Temple of Vesta" in Rome. In order to accommodate worship services, the church raised the old dance floor for the pulpit and installed the choir in the former bandstand. A former hothouse was converted into a baptistry and storage and utility rooms added by Byrd were enlarged into nurseries. The original rooms of the house and the gatehouse were used for Sunday School classes and office space. Pastor John Wiley observed that his congregation was repeating a pattern established by the early church, which made churches of former pagan temples in the Roman empire.

In a late 1950s brochure, the church acknowledged the need for expansion: "We plan to erect a first building for our educational activities. Later we shall build a new sanctuary. The original structure shall be maintained for its beauty and historical association." An $800,000 fund-raising campaign was started in 1962, with the idea that four new buildings would be put up around the temple. An education building was completed in 1963.

During planning, it was estimated that an additional $120,000 would be needed to relocate utilities and repair the 1925 structure. Meanwhile, the congregation had grown to over 600 members. By 1968 the church had revised its building plan to include the demolition of Ward's former home. The Women's Civic Club of Birmingham, the Women's Committee of 100 and the Women's Chamber of Commerce joined in opposing the demolition plans and wrote and telephoned area leaders to plea for its preservation. The Alabama Historical Commission backed their efforts in 1969.

The protests failed, however, and the the congregation voted to proceed with demolition in 1970. The statuary, kitchenwares and other trappings were sold at public auction, during which visitors had a last opportunity to explore the deteriorating house, which was demolished in April 1971. The church donated the smaller Sibyl Temple to the Vestavia Hills Garden Club, which moved it to its current location overlooking Montgomery Highway.

A new church building was completed in 1972. A fellowship hall and adult classroom building was added in 1981. The church campus was heavily damaged by an tornado in April 2000. After repairs were done, a wave of new buildings, already being planned, were completed in 2002–2003, including a choir suite, a preschool and children's building, new adult classrooms, playgrounds and an outdoor amphitheater.