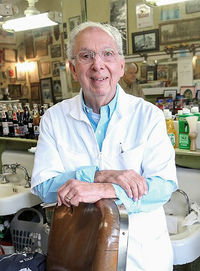 Vincent Oliver (born 1941 in Birmingham; died July 9, 2018 in Birmingham) was a barber and owner of the Hippodrome Barber Shop in Woodlawn.

Oliver the son of John Vincent and Josephine Accardo Oliver, grew up in East Birmingham, attending kindergarten at Willow Wood Park and grammar school at Woodlawn Grammar School. He graduated from Woodlawn High School in 1958. He played saxophone in high school, and took the stage with local groups like The Nomads, and recorded with Phil Cay & the Blue Notes in the late 1950s.

Oliver knew he wanted to become a barber since he was a boy. He had five uncles and several cousins who were all barbers. After high school, he sold his car and bought a train ticket to Florida to attend Jacksonville Barber College. He met Betty McLeod there, married her on July 2, 1960, and brought her back to Birmingham.

Oliver began his career at Tom’s Barber Shop on 10th Avenue North in East Birmingham. In 1966 he took a chair at Fowler’s Barber Shop in Woodlawn, and became sole owner of the business in 1967. He initially changed its name to the "Varsity Barber Shop", before settling on "Hippodrome", a reference to a theater in New York City where Harry Houdini had performed. He gradually filled the shop's walls and showcases with an ever-growing collection of pop culture memorabilia.

Vincent and Betty raised three sons; John, Anthony, and Chris, at their home in Huffman. The couple relocated to Leeds in 1997. He slowed his schedule in the late 2000s, but made no plans to retire. Oliver died at UAB Hospital in July 2018 after contracting pneumonia. His funeral services were held at St Theresa Catholic Church in Leeds followed by burial at Cedar Grove Cemetery.