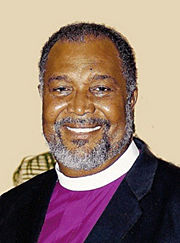 He served in the US Air Force, stationed in Arizona, as a non-commissioned officer on the Titan II ICB missile system from 1965 to 1969. During that time he began preaching at Phillips Chapel CME there. After his discharge, he renewed his license at the Carter Tabernacle CME Church in Orlando, Florida. He was ordained a deacon and elder of the Florida Annual Conference by Bishop Elijah Murchison and has pastored churches in Florida, Virginia, Ohio, and Texas, including 25 years at the 1,500 member Metropolitan CME Church in Houston, Texas. While there he oversaw the creation of numerous community ministries and the completion of a $7.5 million church campus.

On June 30, 2010 Lockett was elected the 57th Bishop of the CME Church at a ceremony in Mobile. He was appointed presiding prelate for the 5th Episcopal District, which includes 225 churches with 32,000 members in Alabama and Florida.

Lockett was also a business investor and president of crosstie maker Century Forest Industries in Lufkin, Texas and co-founder of Crystal Horizon Investment, a for-profit farming and rural development venture in Ghana, West Africa. He served on numerous civic boards, including the board of trustees of Texas College in Tyler, the "Ministers Advisory Council" to several mayors of Houston, and the board of the Deep East Texas Council of Government. He chaired the board of trustees of Miles College. He was also president of the Texas State Legal Services Support Center and the Lufkin Branch of the NAACP.

Lockett died on the return flight from an extended trip to visit CME missions in Africa in March 2011. He was survived by his wife, Lillie; three children (Dwayne, Vernon and Nicole); and five grandchildren.