Difference between revisions of "Wash Bishop" 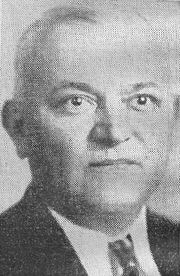 Bishop was elected to the County's Board of Revenue in 1928, then made president by a vote of the five-member body. In 1931 the Alabama State Legislature abolished the Board of Revenue and Instituted a 3-person County Commission, to which he was appointed the first chair. As instituted, the members would serve staggered 6-year terms with an election every two years. However in 1935 the Legislature changed the schedule so that all three members would be elected together to two-year terms. Bishop was re-elected in 1936 and was again made chair. He suffered a stroke while at his office in December 1936, and announced that he planned not to run again in 1938.

Bishop resumed working in late 1937, but suffered a second stroke at home in March 1938 from which he never regained consciousness. He was survived by his wife, Naldo and four sons; Clinton, Maurice, Brooks and Julian. He was buried at Elmwood Cemetery.

In addition to his business and public office, Bishop served as Sunday School superintendent and steward at East Lake Methodist Church and was a member of several fraternal organizations.