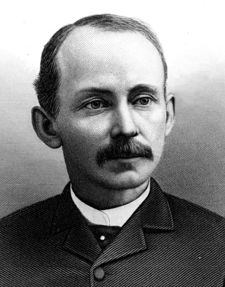 A check drawn on the Berney National Bank signed by Berney

This article is about the banker. For the playwright, see William Berney (playwright).

William Berney (born May 27, 1846 in Montgomery; died October 20, 1905 in Montgomery) was the founder of the Berney National Bank.

Berney was born in Montgomery, the fourth of eleven children born to James E. and Jane Elizabeth Saffold Berney. His father was a noted physician and he was educated in Montomery and Baltimore before entering the Confederate Army in 1864 at Dalton, Georgia. He served with Hallonquist's Reserve Regiment and Semple's Alabama Battery as an ordnance sergeant through the end of the war, participating in battle at Dalton, Resaca, Atlanta, Jonesboro and other sites.

After the war he was appointed deputy collector of internal revenue for the 2nd District of Alabama. Before long he took a position as cashier for the Lehman, Durr & Company cotton commission house. He married the former Lizzie J. Taylor in Montgomery on April 29, 1868 and then worked for the South & North Alabama Railroad for a year before resigning to try his hand at farming.

After the formation of the National Bank of Birmingham, Berney was hired as a bookkeeper and became bank-president Charles Linn's protégé. He was promoted to cashier in 1875 and was, the same year, elected to serve on the Birmingham Board of Aldermen during the administration of William H. Morris. After Linn's death in 1882, Berney was elected president of the National Bank of Birmingham, succeeding his mentor.

Three years later he resigned from the National Bank of Birmingham to found his own Central Bank of Birmingham, which was soon reorganized as Berney National Bank. In 1887 he and his brother Chollet founded the Berney Bank of Bessemer, housed in the Berney Brothers Block. In 1888 William was named president of the Bessemer Land and Improvement Company, charged with developing the newly-formed industrial city of Bessemer. He resigned in 1890.

Berney died in October 1905 and is buried in Montgomery's Oakwood Cemetery.