Difference between revisions of "Woodlawn"

This article is about the community. For the 2015 film, see Woodlawn (film). 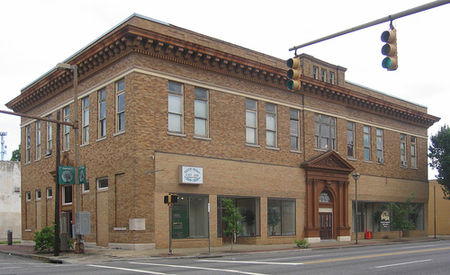 Woodlawn is the name of a community, once an independent city, now part of Birmingham. It is located east of Avondale, north of Crestwood and west of East Lake. The center of Woodlawn is at the intersection of 1st Avenue North and Georgia Road near 54th Street.

Present-day Woodlawn was settled by a group of farming families who entered the area in 1815, just as it was opened to settlement by the Treaty of Fort Jackson. The community took its name from the Wood family, headed by Obadiah Washington Wood and his son Edmund Wood, Huguenots from Greenville, South Carolina. The site they chose was a well-watered section of Jones Valley along the Georgia Road which extended deep into what was then still part of the Mississippi Territory.

Edmund was granted 1200 acres of Obadiah's holdings on which to raise his family. It was on that property that the town of Rockville, a small cluster of houses near the roadside, was established in 1832. The first railway came through the valley in 1870, at which point the settlement was renamed Wood Station (or Wood's Station) and began to grow steadily. By the end of that decade a private "Woodlawn Academy" had been founded to educate the children of the communities 89 residents. On September 18, 1883 the U.S. Postal Service approved the renaming of the community as "Woodlawn".

In 1884 the Georgia-Pacific Railroad began offering passenger service into the rapidly-growing city of Birmingham, about 4 miles to the west. That service was replaced by a dummy line streetcar in 1887, and by electric streetcar service in 1895.

In 1890 the population of the community was 1,506. In 1891 it was incorporated as the City of Woodlawn, preserving the name of the Wood family who remained active in civic affairs. The first city government was presided over by Mayor W. I. Gibson along with the Woodlawn Board of Aldermen. Other mayors included John Burris. In 1895 the first City Hall and Jail were built.

By 1900 the population of Woodlawn was 2,848. A second, larger City Hall was built in 1908, along with schools, churches, a fire station, and library.

In 1910 the City of Woodlawn was annexed into Birmingham as part of the Greater Birmingham campaign, but maintained a strong community spirit that was bound up with the Wood family, who had turned their estate into a public park (now Willow Wood Park), complete with spring-fed swimming pool. The grand gothic-inspired Woodlawn High School opened in 1922.

Commentators through the first half of the 20th Century never tired of remarking on the local pride found in Woodlawn - "a really great section of Birmingham...A section typical of the fine things in life." (according to one newspaper story from 1950)

This pride did not prevent the spread of urban blight following the social turmoil of the 1960s and economic turmoil of the 1970s. Compounding the growing problems of aging housing stock and "white flight" was a crisis of joblessness and poverty that took hold in the community. The need to seriously address these problems was evident by the beginning of the 1980s and some efforts at revitalization were attempted.

Within the city of Birmingham, greater Woodlawn is characterized as one of 23 "Communities" that participate in the "Community Participation Program" that was drawn up to encourage local political activism and community development. The four neighborhoods that make up the Woodlawn community are East Avondale, Oak Ridge Park, South Woodlawn, and the Woodlawn neighborhood.

In the last few years, residents of Woodlawn have worked with the City and Region 2020 to create a master plan as part of Birmingham's "Comprehensive Master Plan" process. An initial project to implement master plan goals in the central residential section of Woodlawn, north of First Avenue, has met with limited success. Several dilapidated houses were improved and an active community garden was started.

The business district of Woodlawn has undergone several revitalization efforts, but with limited success.

In 2010 Woodlawn United (initially called the Woodlawn Foundation) was founded as to promote community development and has succeeded with several projects.

In 2014 the Woodlawn Business Association began hosting street markets on 55th Place South several times of year drawing a variety of vendors to the area.

Other non-profits in Woodlawn include SocialVenture, Audiostate 55, and Crossroads to Intervention.