Woodlawn's mascot is the Colonels, and the school colors are green and gold. The school newspaper is The Tattler.

Woodlawn High School was established in 1916 after Woodlawn was annexed into Birmingham. The present building on 1st Avenue North was designed by architect William B. Ittner of St Louis, Missouri in association with Birmingham architect Harry B. Wheelock. Charles Hall was the contractor for the construction, which was was completed January 30, 1922.

The initial enrollment was 901, of which 700 were transferred from Birmingham's Central High School, then being reconstructed after a fire. The dedication was held on February 3 of that year. The student body selected chose "Junior Colonels" as their team name and gold and white as their school colors, honoring Coach James' alma mater of Centre College in Richmond, Kentucky.

A large mural around the proscenium arch in the high school's auditorium was painted between 1934 and 1939 by Sidney van Sheck and Richard Blauvelt Coe for the Works Progress Administration. It is the largest WPA mural in the South.

The Warblers are a men's chorus that started as a singing club at Woodlawn, active from 1929 to 1977. Most current Warblers members are alumni of the Woodlawn club.

The school was expanded with a $282,000 "delta-shaped" two-story band and shop building, completed before the 1954 fall session. In 1956 the Woodlawn debate team, coached by Rose B. Johnson, won the inaugural Barkley Forum, a prestigious debate tournament at Emory University in Atlanta.

Woodlawn's Junior R.O.T.C. program has been active since 1922 and has started the military careers of numerous officers in the U.S. Military. 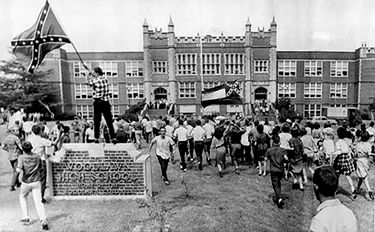 After World War II, white flight resulted in the loss of many middle-class families in the Woodlawn area. The circumstance was greatly accelerated by the court-ordered desegregation of Birmingham City Schools beginning in September 1963. The announcement of the order triggered a student protest outside the school. During 1964, as plans for desegregation were approved, students at several white high schools staged walkouts in protest. At Woodlawn, though, football coach John Howell instructed his team to surround the building to keep their classmates from walking out.

The first six black students to enroll at Woodlawn arrived as underclassmen in the fall of 1965. For the first years, black students were steered toward remedial classes and dismissed on an alternating bell schedule to reduce interactions with whites in the hallways. Slowly those accommodations faded as the idea of integrated classes became less of an issue. Until 1970 the decision to attend a formerly all-white school was still left to parents, but after that year black students were assigned to schools by district and many all-black high schools, such as Ullman High School, were shuttered.

In the mid-1970s, the school was thriving with a fully integrated student body and faculty, including not just white and black students, but also children of immigrants from Viet Nam, Iran, Cuba and Greece. Standout running back Tony Nathan was voted "class favorite" in 1974. As the decades wore on, however, more and more families with means had moved to suburbs like Vestavia Hills with newly-founded school systems. The Woodlawn neighborhood was emblematic of socio-economic change in the 1970s and 1980s, and the school system's budgets suffered with the area's deteriorating economic profile. Some of the school's popular social clubs, such as the Warblers singing group, faded away only a few years after welcoming their first black members.

Conditions reached the point where the school was repeatedly placed on the state's "Academic Alert" list. Extracurricular activities were dropped in favor of at-risk counseling and programs for unwed mothers. The building itself became so dilapidated that teachers would walk to McDonald's rather than use the school's restrooms. Discussion of closing the school was heard before a decision was made to renovate it as a magnet high school with a smaller enrollment.

The Montgomery architecture firm of Sherlock, Smith & Adams coordinated plans for the renovation, which was completed in 2007. The Woodlawn High School Alumni Association helped raise $190,000 for restoration of the auditorium mural. Significant landscaping work at the school was done by volunteers from the Church of the Highlands in the summer of 2008.

In 2011, Woodlawn became the home of the city's "Academy of Business and Finance" under Superintendent Craig Witherspoon's plan to establish career academies in the city's high schools. The Woodlawn Foundation and Desert Island Supply Co. began offering extracurricular programs to students.

Despite those efforts Woodlawn High School was still designated as a "failing" school under the guidelines of the Alabama Accountability Act of 2015 in 2016, 2017, 2018 and 2019. Efforts continue with the implementation of the Woodlawn Innovation Network in the schools that feed into Woodlawn High. The five-school network operates under more flexible policies to permit innovation in teaching and curriculum. Additional programs operated in partnership with Jones Valley Teaching Farm, Red Mountain Makers and other institutions were also developed.

In November 2021 the Birmingham Board of Education approved a contract for a new 2,800-seat football stadium and field house at Woodlawn High School. The $8.7 million project was designed by Charles Williams & Associates and constructed by Argo Building Company.