From Bhamwiki
(Redirected from The Red Cat)
Jump to: navigation, search 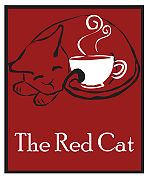 The Red Cat is a coffeehouse and music venue opened in September 2008 as O Kafés! in the Martin Biscuit Building at Pepper Place. The name change occurred in March 2010 due to confusion over the pronunciation of the shop's name.

The Red Cat is the retail extension of O Kafés Coffee Roasters, which roasts premium Fair Trade coffees for retail sale. The company was founded in 2005 by Kirk Summers and Erin Isbell. In addition to packaged coffees, the company has operated a booth serving fresh-brewed coffee at the Pepper Place Saturday Market.

A second location of The Red Cat opened on April 1, 2016 at LIV Parkside, facing Railroad Park.

In October 2019 Summers and Isbell sold the chain to Mike and Aileen McElwain. They extended the hours of the shop in the Pepper Place Entertainment District, and applied to sell beer and wine. The moved to expand the kitchens at both locations.