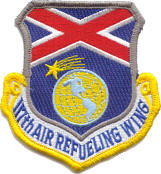 The 117th Air Refueling Wing is an Air National Guard unit based at the Birmingham International Airport. The unit operates nine KC-135 Stratotankers with a base staff of 275 and a total personnel of 1,243.

The unit has been stationed in Birmingham in various forms since 1924 and spent most of the years between wars engaged in aerial mapping and surveying for Federal infrastructure projects. The group, known by various names, most notably the 106th Observation Squadron, also operated the first government air mail routes in Alabama.

In 1946 reknowned bomber pilot and then-Colonel John M. Donalson reorganized the unit as the 106th Bomb Squadron (Light). They were joined in Birmingham by the 160th Fighter Squadron, flying F-51s. The two squadrons were assigned together to the 117th Fighter Group, which later becamse the 117th Tactical Reconnaissance Group and established its headquarters at Birmingham.

The group was activated on April 1, 1951 for duty in the Korean War. For most of the next 21 months, they were assigned to Shaw Air Force Base in South Carolina. The 160th moved to Lawson Field in Columbus, Georgia on October 1, 1959 and converted their F051s to RF-80s, deploying to Europe as the 38th Tactical Reconnaisance Squadron. Key personnel were assigned to other groups active in the Korean theater.

In 1952 the 106th was placed back under the command of the 117th Tactical Reconnaisance Group and returned to Birmiingham in 1957. This unit flew T-33s and RF-84Fs. They returned to active duty in 1961 during the Berlin Crisis, deploying 20 RF-84s, 2 T-33s and one C-47 to Dreux, France, marking the first trans-Atlantic crossing for the smaller craft, which had to island hop in several legs. The units were relieved from active duty in August 1962. The need to develop the capability of non-stop transcontinental flight was evident, and the 106th Squadron was tasked with leading that effort.

Over the next several years the 106th pioneered the practice of air-to-air refueling over water using KC-97 and KC-135 tankers to fuel RF-84s in test flights from Birmingham to Puerto Rico. The second round of testing was coordinated with the Alaskan Air Command and served the dual purposes of perfecting long-range fighter deployment and creating aerial survey maps of unphotographed regions of the 51st state.

In October 1961 a group of pilots from the 106th was recruited by the CIA to train Cuban expatriate pilots for a planned invasion of Cuba. In order to maintain "plausible deniability" of US involvement in the operation the pilots were sworn to secrecy and conducted training in Nicaragua.

During the invasion on Cuba's "Bay of Pigs", the Cuban pilots were unable to maintain the extensive air support required and several American pilots accepted covert flying duties. Four of them were shot down and killed. The involvement of the Alabama guard pilots was revealed by the Birmingham News in 1961, but the details of the operation were kept secret until the late 1990s.

In August 1964 twelve RF-84F jets completed their first non-stop transatlantic flight, requiring three air-to-air refuelings on the way to Europe and four on the way back to Birmingham.

In April 1967 the 106th deployed four craft and 93 personnel to "Operation Clove Hitch III", a massive exercise coordinated with the U.S. Army, Navy, Marines, and Air Force to simulate an invastion of the Puerto Rican island. Other significant exercises followed iver the next several years.

On February 25, 1971 the 106th TRS was re-equipped with RF-4C "Phantom II" reconnaissance jets and, soon later, a WS430B modular, transportable photographic processing and interpretation facility. The unit returned to Alaska for exercises and aerial surveying as part of "Exercise Jack Frost" in 1975. Later that same year they pioneered the use of electronic counter-measures in field exercises during "Exercise Brave Shield XIII" at Eglin Air Force Base, Florida. In 1976 the squadron flew 18 Phantom jets to Rammstein, Germany, in company with two Air Force C141 transports which also took off from Birmingham in "Operation Coronet Sprint". Over the course of 537 hours flight crews from the 106th flew 137 sorties over Western Europe, returning on April 1.

In August 1990 the 117th deployed to the United Arab Emirates in support of Operation Desert Shield and Desert Storm.

In November 1994 the unit was again re-equipped, this time with KC-135R tankers. The units became the 106th Air Refueling Squadron and 117th Air Refueling Wing. The rechristened units deployed to Pisa, Italy in 1995 in support of Operation Deny Flight over Bosnia. In 1999 they returned to Europe, taking residence at Croughton, UK to support Operation Noble Anvil over Kosovo. In "Operation Coronet Nighthawk", a counterdrug operation, the unit reported to Curacau, Netherlands Antilles. In 2001, for "Operation Noble Eagle" they deployed to Mac Dill Air Force Base, Florida for homeland security duty.

In 1995, the unit completed an excavation and bioremediation project at the airport to eliminate hazards found during the replacement of its petroleum, oils and lubricants facility. Seven 25,000 gallon fuel tanks, a 500 gallon sludge tank, and 17,500 cubic yards of soil were excavated and removed to comply with regulations from the Alabama Department of Environmental Management.

In 1999 the 117th was called to active duty by President Clinton, contributing 6 planes and 210 personnel to NATO operations against Yugoslavia in Kosovo.

The 2005 Base Realignment and Closure recommendations propose distributing the 117ths KC-135Rs to Air National Guard stations in Maine, Tennessee and Arizona. Firefighting personnel would be stationed to Dannelly Field, while the expeditionary combat support group would remain based in Birmingham. The Alabama congressional delegation joined Colonel Paul Brown, commander of the 117th, in strong opposition to the dispersal and the commission voted in August 2005 to keep the unit in Birmingham. The project to extend the main runway from 10,000 to 12,000 feet, allowing a fully loaded KC-135 tanker to take off, was credited by Colonel Brown with keeping the unit in Birmingham.