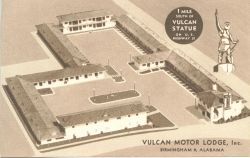 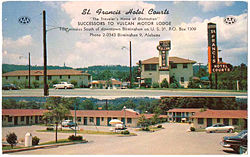 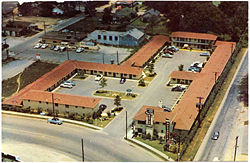 The Vulcan Motor Lodge was a motel located at 1930 29th Avenue South (then part of U.S. Highway 31) at East Avenue (now Independence Drive) in Homewood.

The motel featured 67 air-conditioned rooms (singles, doubles and suites), each with its own telephone and tiled bath with combination tub/shower. The motel offered maid and porter service and a playground.

The motel was expanded in 1960 to a total of 112 rooms at a cost of $600,000. The renovation included a heated swimming pool, a new King's Inn Restaurant, meeting rooms, and a renovated entrance. Charles McCauley designed the addition, which was built by G. W. Hallmark and Sons.

The motel was later town down and eventually replaced with Independence Plaza.