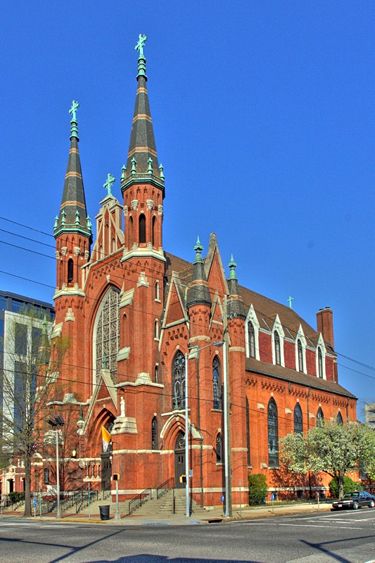 St Paul's Cathedral is the seat of the Roman Catholic Diocese of Birmingham, located at 2120 Third Avenue North, on the northwest corner of its intersection with 22nd Street North in downtown Birmingham. The present Victorian Gothic brick building was dedicated on November 30, 1893.

The first Catholic church in downtown Birmingham was a 30-foot by 60-foot wooden building on a site adjacent to the present cathedral. It was moved to the present site on the corner and enlarged in 1880.

The cornerstone for the Neo-Gothic church building, designed by the German-born, Chicago-based architect Alphonse Druiding, was laid on June 11, 1890 and $90,000 was spent completing the building over the next three years. W. A. Bird supervised much of the construction. The walls of the 96-foot by 140-foot building is clad in red brick and limestone with a polychrome slate roof. The two octagonal towers on the southeast front carry spires reaching to 183 feet. A large statue of Christ dominates the facade, flanked by an image of St Paul the Apostle, the church's patron and St Joseph. The interior of the nave is 66 feet wide and 130 feet long. The clerestory walls are supported by ten slender granite columns and the vaulted ceiling reaches 67 feet above the interior floor. The semicircular apse supports a domed vault and frames the altar. The original altarpiece was installed on the back wall of the sanctuary in 1905. It was fabricated in Spain of Italian marble and Mexican onyx at a cost of $5,000. It has since been modified several times, most notably in 2004 when the altar table was brought forward so that the celebrant faced the congregation. The sculpted angels flanking the tabernacle also remain from the original altar.

Irish-Americans made up the majority of the parish of St Paul's at its founding. A memorial in the southwest corner of the nave recognizes founding members of the Holy Name Society. The church's stained glass windows, made by G. C. Riordan & Co. in Cincinnati, Ohio, depict the Sacred Heart of Jesus, the Immaculate Heart of Mary, the Assumption of the Virgin, Saint Paul, Saint John, Saint Patrick, Saint John Berchmans, the Good Shepherd, the Holy Family, and Christ gathering the children. The eastern windows are topped by trefoils, while those on the west feature quatrefoils. A circular window over the sanctuary depicts the Dove of the Spirit. Statues in the interior honor Mary, the mother of Christ, St Joseph and St Anthony, patron of Italy - a nod to the increasing numbers of Italian catholics in Birmingham. In July 2021 a new window in the style of the Riordan ones was installed in the sacristy. It depicts St. Thérèse of Lisieux and was made by Conrad Schmitt Studios of New Berlin, Wisconsin.

In 1968 a four-manual Moller pipe organ was installed in the choir gallery at the rear of the nave. The church became a cathedral church with the creation of the Diocese of Birmingham in December 1969. The Bishop of Birmingham presides ceremonially from a "cathedra" (chair) in the church's sanctuary. The present bishop is Steven Raica and the cathedral's rector is Bryan Jerabek.

A major renovation in 1955 included the addition of air conditioning to the cathedral. Structural repairs and interior remodeling in conformance with the Second Vatican Council was completed in 1972. The building was added to the National Register of Historic Places in 1982. A new 4-manual Moller organ was installed in the choir gallery in 1986. A centennial renovation with improved wheelchair accessibility was completed in 1992. In November 2013 a $6.5 million 14-month re-roofing and exterior renovation project began.