Alabama Aircraft Industries, Inc. was an aircraft maintenance and customization company based on a 200-acre facility at the Birmingham International Airport. The company, which began as the Hayes International Corporation in 1951, manufactured cargo systems, rocket vehicles, control systems and components, and offered engineering services to private and governmental clients. The company employed over 2,300 people and serviced over 200 aircraft per year. The company’s 2005 revenues were $150 million. Major contracts for the military included heavy maintenance and reconfiguration of C-130 and KC-135 aircraft.

The company's corporate headquarters was located at 1943 50th Street North. It was acquired out of Chapter 11 bankruptcy in 2011 by the Virginia-based Kaiser Holdings Group, which operated there until downsizing in 2014. Stewart Industries International was recruited to open a new maintenance and repair operation at the property in 2018. 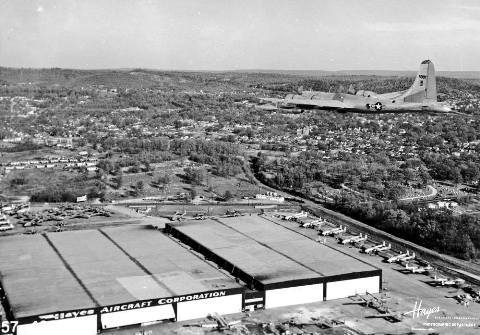 A 1965 civil rights case, one of the first prosecuted under Title VII of the Civil Rights Act of 1964, found that Hayes continued to keep black workers in the lowest paying, most menial jobs, depriving them of opportunities for advancement enjoyed by white employees.

In 1982 Hayes contracted with Performance Advantage Inc. to recycle drained jet fuel and to dispose of paint and solvents used in their operation. The waste was found to have been illegally dumped and Hayes was prosecuted for the crime.

In 1986 Hayes pleaded guilty to 38 counts of making false statements and paid over two million dollars in fines, restitution and damages. During the same year a Navy C-130 refurbished by Hayes crashed during a test flight in Dothan, killing three reserve officers aboard.

In 1988 Hayes changed its name to Pemco Aeroplex.

In 2000 Michael Tennenbaum, a financial advisor for Bear Stearns, which controlled 27% of the corporation, purchased a fourth of Pemco's stock. Tennenbaum installed Ron Aramini of America West Airlines as CEO, and restructured the board to include more former military officers who could advise on bidding for military contracts. He relocated the headquarters to Birmingham from Denver and renamed the company, which had been called Precision Standard, for its Pemco Aeroplex division. The chairman of the board is Michael Tennenbaum, The company also started an aircraft mechanic training program for local high school students which has helped stabilize the supply of skilled labor.

Between 2000 and 2005 shares of stock rose from from about $12 to over $24. On February 28, 2006 the Birmingham City Council passed a resolution to invest up to $2.5 million in infrastructure improvements contingent on Pemco being awarded the KC-135 Re-Compete contract. In May the Air Force reduced the number of craft in its 2008 contract, prompting Boeing to withdraw from its partnership. Pemco asked the Air Force for permission to bid as a sole contractor, but was denied. AAI later sued Boeing for $100 million, claiming that the larger company had abused the partnership and stolen trade secrets. After numerous delays, AAI was awarded $2.1 million from Boeing by a federal jury in March 2020. Judge David Proctor upheld the jury's verdict on appeal.

The bankruptcy of Northwest Airlines, a major Pemco customer, caused earnings to slip in 2006 below the level at which the company's $31 million debt could be serviced. The company went into negotiations with its major lenders, Wachovia and Compass Bancshares, regarding refinancing.

In July 2007 Pemco agreed to sell Pemco World Air Services, its Dothan-based commercial aircraft conversion and maintenance division, for $43 million to WAS Aviation Services, Inc. The sale would fund the retirement of bank debt and pension plan liabilities. The remaining company would be re-named Alabama Aircraft Industries.

In February 2011 the company filed for Chapter 11 bankruptcy protection in advance of seeking an agreement with UAW Local No. 1155 to terminate its pension plan, reducing long-term obligations. It was acquired out of bankruptcy by the Virginia-based Kaiser Holdings Group. The facility operated as Kaiser Aircraft Industries until 2014.