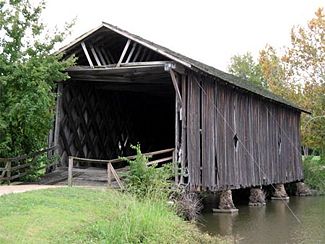 The Alamuchee Bridge or Alamuchee-Bellamy Covered Bridge is an 88-foot-long wooden covered bridge located over a duck pond on the campus of the University of West Alabama in Livingston. It is maintained by the Sumter County Historical Society.

The bridge was constructed in 1861 over the Sucarnoochee River by Confederate troops under the command of Captain William A. C. Jones. It provided a connection between Livingston and York on a route that is now part of U. S. Highway 11. It was constructed of Yellow pine with wooden pegs using the Town lattice truss patented by Ithiel Town of Connecticut in 1820. The interior clearance is 17-feet in width by 14-feet in height. General Nathan Bedford Forrest crossed the bridge en route to Mississippi during the war. Sheriff Steve Renfroe was hanged from the bridge (or nearby) by a lynch mob in 1886.

In 1924 when a concrete bridge replaced it, the bridge was moved 5 miles south to bridge Alamuchee Creek on Bellamy-Livingston Road (Sumter County Road 13). It remained open to motor vehicles until 1958 when a new concrete bridge was erected there. While the new bridge was under construction, the covered bridge was hit by a truck and damaged. It was closed to traffic and not maintained.

In 1971 the Sumter County Historical Society moved the bridge to its present site and restored it.