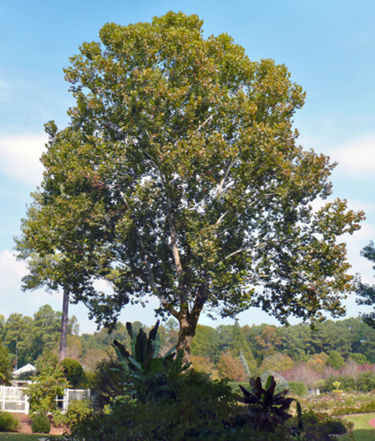 The moon tree, an American sycamore at the Birmingham Botanical Gardens.

Sycamores are recognizable by there mottled gray or red-brown bark which, because it is inflexible, sloughs off in large plates exposing whitish-green wood beneath. Large trunks are often hollow and the tree's roots are fibrous. The large (4-9") alternate leaves grow from buds formed in the axils of older leaves. The leaves have three or five toothed lobes, bright yellow-green in color until they turn brown and drop in Autumn.

Sycamores flower in May, producing tiny dark red and light green flowers arranged in a spherical "button"shape. In winter, the tree produces brown, spherical seed pods, about an inch in diameter, hanging individually on slender stems.

Sycamore wood is light and relatively weak, but resists splitting. It is sometimes used for furniture, interior paneling or butcher blocks. The tree is commonly found in wetlands and wooded areas near streams and ranges as far North as Maine, as far South as Florida, and was far West as Nebraska. It has been naturalized in other regions of the United States, as well as in Argentina and Australia. It thrives in urban environments and bears transplanting, and is therefore a popular shade tree.

The American sycamore is the primary target of the "Sycamore leaf beetle" and is susceptible to "Plane anthracnose disease", long associated with the Oriental plane (Platanus orientalis), which has evolved a natural resistance. Though the disease rarely kills the tree, it shrivels the leaves and renders the Sycamore unsightly and ineffective for shade. The London Planetree (Platanus × hispanica'), a hybrid of the American and Oriental species, has overtaken the American sycamore in popularity for that reason.

The Birmingham moon tree is an American sycamore planted at the Birmingham Botanical Gardens in 1976 from a seed which orbited the moon aboard Apollo 14's command module.