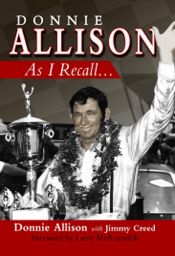 Dunkiny "Donnie" Allison (born September 7, 1939 in Miami, Florida) is a former driver on the NASCAR Grand National/Winston Cup circuit, who won ten times during his racing career, which spanned the 1960s, 1970s and early 1980s. He was part of the "Alabama Gang," and is the brother of 1983 champion Bobby Allison and uncle of Davey Allison. Allison has lived in Hueytown since moving from Florida with his brother and their friend Red Farmer in the late 1950s.

The Alabama Gang dominated the circuit of small racetracks around the South through the 1960s and were among the first stars of the sport as it gained national prominence in the 1970s. Donnie was distinguished by showing prowess in both stock car and open-wheel racing, having finished fourth in the 1970 Indianapolis 500 in a car borrowed from friend A. J. Foyt. He was named "Rookie of the Year" and went on to finish 6th in the following year's Indy 500.

Donnie is possibly most remembered for his involvement in a final-lap crash and subsequent fight with Cale Yarborough at the 1979 Daytona 500, the first NASCAR race to be televised nationally from start to finish. Allison was leading the race on the final lap with Yarborough drafting him tightly. As Yarborough attempted his signature slingshot pass at the end of the backstretch, Allison attempted to block him. Yarborough refused to give ground and as he pulled alongside Allison, his left side tires left the pavement and went into the wet and muddy infield grass. As a result, Yarborough began to lose control of his car and contacted Allison's car halfway down the backstretch. As both drivers tried to regain control, their cars made contact several more times before finally locking together and crashing into the outside wall in turn three. After the cars settled in the grass, Allison and Yarborough began to argue. After they had talked it out, Bobby Allison, who was lapped at that point, pulled over and began defending his brother, and a fight broke out. Richard Petty, who was over half a lap behind at the time of the crash, went on to win the race. The fight made headlines all across America. The publicity was instrumental in the growth of NASCAR.