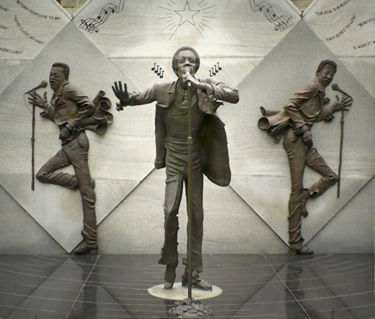 Detail of sculpture in April 2008

Eddie Kendrick Memorial Park on the corner of 18th Street and 4th Avenue North is a memorial garden to singer and Birmingham native Eddie Kendricks of the Temptations.

The park, on the site of the former Brock's Drugs building, was dedicated on October 16, 1999. The park uses Kendricks' family name sans the "s", which was added early in his career. It features a bronze sculpture of Kendricks by local artist Ron McDowell, as well as sculptures of the other Temptations, set into a granite wall. The singers' cuffs each have a letter on them, together spelling "BHAM" from left to right.

Inscribed on the granite are the names of Temptation's hit songs. Recorded music can be heard throughout the park, featuring songs by Kendricks and the Temptations.

Over the years, the installation has been targeted several times by vandals and metal thieves. By early Summer 2013 metal plaques were missing, sculpted friezes had separated from their backing, and painted graffiti had been removed more than once. The city contracted with McDowell for $16,000 to repair and refurbish the monument.