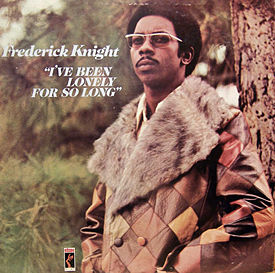 Frederick Knight (born August 15, 1944 in Bessemer) is an R&B singer, songwriter and record producer best known for his 1972 hit "I've Been Lonely For So Long" and for writing and producing Anita Bell's 1979 #1 hit "Ring My Bell".

Knight grew up in a family that boasted several teachers. He graduated from Abrams High School where he became interested in music, performing in several groups and with the school chorus. He attended Alabama A&M on a music scholarship, and, after graduating, went to New York to launch his music career.

Knight recorded "Throw the Switch" for Mercury and "Have a Little Mercy" for Capitol Records in New York, but failed to find much success. He returned to Bessemer to launch a home-grown music empire with his own publishing, production and management company, Frederick Knight Enterprises. He recorded "I've Been So Lonely For So Long" at Neal Hemphill's Sound of Birmingham studio, where he also worked as an engineer. The song was written by Knight's wife Posie along with Jerry Weaver and recorded with just a tambourine and wooden stool for percussion.

They shopped the demo to Elijah Walker of Stax Records in Memphis, who distributed it nationally in 1972, earning gold record status. The single reached #8 on Billboard's R&B chart and #27 on the pop chart. He followed up with "I Betcha Didn't Know That", "Passing Thru", and "I Wanna Play With You" on Stax's "Truth Records" imprint.

After Stax failed, Knight and a friend, Clinton Harris founded their own record company, Juana Records in 1975. They signed "The Contollers", scoring a hit with "Somebody's Gotta Win, Somebody's Gotta Lose", followed by Anita Ward's "Ring My Bell", which reached #1 on the pop charts. In 2000 Juana expanded into the Gospel field with the "Juana Praise" label, which represented Debra Snipes among other artists.