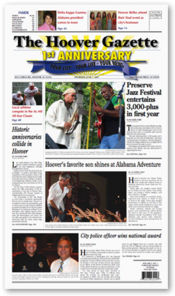 The paper was published from June 7, 2006 to August 15, 2007. The newspaper was owned by Eagle Publishing Company, a holding company founded by Clatus Junkin, a businessman and former circuit judge from Fayette County. Junkin's son, John, was the Gazette's general manager. At its peak, the paper claimed 20,000 readers.

At its inception, the husband and wife team of Peyton and Barbara Bobo were publishers; they also publish The Northport Gazette and The West Alabama Gazette (Millport). Robert Carter was managing editor, but after a series of shakeups later in 2006, Carter resigned and the Bobos were replaced in January 2007 by Robert Martin, who also publishes The Montgomery Independent. Don Milazzo, formerly of the Birmingham Business Journal, was the last managing editor.

On June 22, 2007 John Junkin dismissed staff writer Hunter Ford for comments he had made about Hoover High School football coach Rush Propst on the Paul Finebaum radio call-in show. Explaining his actions later on the show, Junkin said that he and Ford had previously discussed the paper's mission to focus on positive news about Hoover and not to get involved with negative stories.

The paper's staff reportedly dwindled to a single writer before the paper ceased publication following the August 16, 2007 edition.