From Bhamwiki
(Redirected from Hyatt House)
Jump to: navigation, search 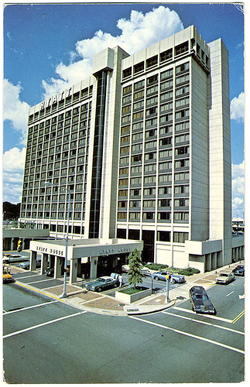 Postcard of the Hyatt House

The 17-story hotel was built in two phases -- the first opened in 1975 as the Hyatt House Birmingham Hotel, and, along with the Parliament House, it was one of Birmingham's premier hotels of the jetset era, featuring 380 rooms, a rooftop restaurant called Billy Bowlegs, and a sumptious Presidential suite. The building was designed by the architectural firm of Tiller, Neal, Butner, Rosa and Seay of Montgomery. Its palette of materials and orientation was selected to complement the BJCC, then still under construction. The entry court was designed by landscape architect Charles Greiner.

The restaurant's name was changed to Hugo's Rotisserie in the late 1970s, and it was there that a young assistant food and beverage manager, Frank Stitt, befriended popular server Avery "Red Dog" Goren, who became a mainstay at Stitt's Highlands Bar & Grill.

In 1991, the BJCC began an ambitious expansion plan for the complex, which included a modern 398-room addition, complete with an atrium and a skywalk to the main exhibition hall in the convention center, along with a new 1,000 space parking deck behind the hotel. During the renovation and expansion, the hotel operated as a Ramada. It officially opened its doors as a Sheraton in early 1992. The expansion featured two new restaurants, an indoor pool and exercise area constructed above the porte-cochère, additional meeting/reception space, and three new Presidential suites. Other changes included the shuttering of the rooftop restaurant and original Presidential suite, which remain unused.

In 1998, the hotel was brought into the Starwood system and a new 25,000 square foot grand ballroom was constructed, along with a minor freshening to the hotel lobby and other public spaces.

In 2005, a $16 million dollar renovation was announced and includes the addition of new retail space, complete refurbishment of all guest rooms and public areas, and renovation of hotel systems.