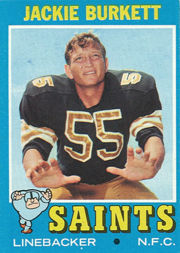 Walter Jackson "Jackie" Burkett (born December 16, 1936 in Thorsby) is a former center for the Auburn Tigers football team who went on to a nine-year career in the National Football League.

Burkett starred on the National Championship 1957 Auburn Tigers football team. He was selected as the 12th pick in the 1959 NFL draft by the Baltimore Colts. He played for the New Orleans Saints in 1966, then with the Dallas Cowboys for two years before returning to the Saints. He retired following the 1969 season.

American football center in the National Football League for the Baltimore Colts, New Orleans Saints, and the Dallas Cowboys. He played college football at Auburn University and was drafted in the first round (12th overall) of the 1959 NFL Draft.

Burkett was inducted into the Alabama Sports Hall of Fame in 1988.