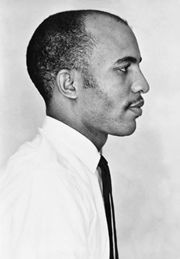 James Luther Bevel (born October 19, 1936 in Itta Bena, Mississippi - died December 19, 2008 in Springfield, Virginia) was a Baptist minister and the Alabama project coordinator for the Southern Christian Leadership Conference during the Civil Rights Movement. Considered Martin Luther King, Jr's most influential colleague and primary strategist, it was his initiative to invite children to participate in mass demonstrations during the Birmingham campaign of May 1963. He was also an organizer of the Selma to Montgomery march in 1965 and numerous other demonstrations aimed at insuring equal rights for African Americans.

Bevel, one of 17 children born to a sharecropping family in Itta Bena, joined the US Naval Reserve and formed a doo-wop band. He was ordained as a Baptist minister while studying at the American Baptist Theological Seminary in Nashville, Tennessee and pastored Chestnut Grove Baptist Church. He completed his degree in 1961. While at seminary, Bevel became acquainted with John Lewis, Bernard Lafayette and James Lawson, who had initiated sit-ins in Nashville as early as February 1960. He wholeheartedly adopted the tenets of non-violent protest and became active in the Nashville Student Movement marrying fellow activist Diane Nash in 1961. He was one of the Freedom Riders who traveled to Jackson, Mississippi in May of that year and was later was invited to join the SCLC where he became a trusted associate of Martin Luther King, Jr.

During the Birmingham campaign, Bevel convinced movement leaders to bring schoolchildren and teenagers into the organized protests. Over many initial objections, he argued that the movement was a call to Christian duty and that children would be able to act in unison better than adults, whose obligations to the workplace and social relationships with those who opposed the protests divided their loyalties. He led the workshops to instruct youngsters about the movement's commitment to non-violence and to prepare them for likely police responses. More than 600 students were arrested on the first day of protests on May 2, 1963. The protests sparked notice around the country. Many, including both Attorney General Robert Kennedy and militant activist Malcolm X criticized the movement's use of children. More than 1000 students took to the streets the next day and, with the jails filled to overcapacity, Bull Connor directed that they be locked up at the Alabama State Fairgrounds, at unused city-owned gymnasiums and other buildings. Meanwhile the police slowed the rate of arrests and worked, instead, to try to limit movement by protesters downtown. Images of police using dogs and fire hoses to turn young protesters away from Kelly Ingram Park galvanized the national conscience against the brutality of Birmingham's white establishment.

Spurred by the shooting death of protester Jimmie Lee Jackson by an Alabama State Trooper, Bevel helped plan and carry out the 1965 Selma to Montgomery march.

Bevel was known as an inventive and impassioned orator and often wore a yarmulke to honor the Old Testament prophets. He spoke passionately for peace and against America's involvement in Viet Nam, leading King to take a more public anti-war stance. After King's death in 1968, Bevel took the lead in carrying out several planned demonstrations, such as a march in support of striking sanitation workers in Memphis, Tennessee and demonstrations for fair housing in Chicago.

Bevel's outspoken support of James Earl Ray's claims of innocence in King's assassination and disturbing revelations about his personal behavior, however, led the SCLC to distance itself from him. He continued working as an activist, however, and founded the "Making of a Man Clinic" in 1970 and the Students for Education and Economic Development (SEED) in the early 1980s.

Bevel ran as a Republican to represent Illinois' 7th Congressional District in 1984, and campaigned as Lyndon LaRouche's running mate in the 1992 presidential election, while LaRouche was serving a federal sentence for mail fraud and income tax evasion. In 1995 he worked as an organizer for the Million Man March in Washington D.C.

Bevel was married four times and, in total, fathered 16 children with nine different women. In April 2008 he was convicted of committing incest with one of his daughters and sentenced to 15 years imprisonment. Suffering from terminal pancreatic cancer, Bevel was released on bond due to ill health in November, and died at another daughter's home in December.